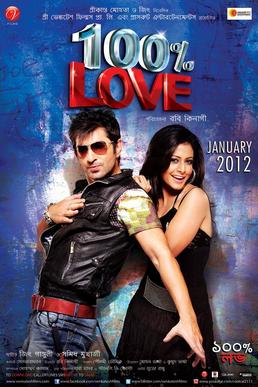 Rahul, who hails from a middle-class family, comes across Anuradha and immediately falls in love with her. However, he soon learns that she is getting married to his friend.

100% Love is a 2012 Indian Bengali-language romantic comedy film directed by Rabi Kinagi. The film is a remake of the 2007 Telugu film Aadavari Matalaku Ardhale Verule and starred Jeet and Koel Mallick in the lead roles. 100% Love released on 20 January 2012.

Rahul (Jeet) is from a middle-class family. He makes several bids to obtain employment, but all were in vain due to his poor language skills and inadequate educational qualifications. As his friends start to all settle down in life, he continues to struggle to secure employment. Rahul has two good friends, Abhi (Sujoy) and Kartik (Biswanath Basu). His father (Supriyo Dutta), who is a teacher, always chides him for being an irresponsible person. This just adds to his woes.

At this juncture, Rahul catches a glimpse of Anuradha (Koel Mallick) and it is love at first sight for him. He learns that she works for a software solutions firm. Luckily for him, Rahul finally secures employment in the same firm. He soon realises that Anu is a short-tempered young woman. Once, Rahul accompanies her, along with two other colleagues to Australia, where he reveals his feelings for her. She refuses him saying that she comes from an orthodox family and her marriage is set for next month.

A depressed Rahul returns to India. Unable to bear seeing his son so despondent, his father meets Anu. She abuses him for recommending his son’s love and accidentally slaps both Rahul and his father. That night, Rahul’s father dies of a heart attack and after cremation of his father, Rahul gets shattered and blames himself for his father’s death, thinking that the death caused due to sharing his feelings to Anu. In order to help lighten Rahul’s mood, Abhi takes him to his village to his marriage. Anu happens to be the girl Abhi is to marry, so Rahul learns that his colleague is marrying his friend. Though Rahul and Anu pretended to be unknown to each other for the slapping incident and therefore, Rahul starts avoiding Anu. A few years ago, their grandfather’s (Biswajit Chakraborty) thought of getting them married early, but was put aside because Abhi and Anu left the house to seek their own identities. This had aggravated the grandfather.

After a couple of years, the parents of Anu and Abhi decide to have them marry to appease their grandfather. Rahul feels at home with Abhi’s loving family and feels happy. But suddenly Soniya, Abhi’s little sister, falls in love with Rahul. Anu gets jealous and realises that she does indeed love Rahul. When Rahul saves the family from a bunch of goons, Abhi and Anu’s grandfather accepts him into the family.

Anu asks Rahul to forgive her as she feels guilty about slapping Rahul’s father. Eventually, Rahul does, and they start talking. The day before the wedding, Anu runs to Rahul. Rahul asks her to forget him because he believes that it would create problems in their happy family; Anu hugs Rahul. Abhi’s grandfather notices them conversing and admonishes Anuradha for bringing disrepute to their family and asks Rahul to leave his house, as he accused him of having affair. Rahul gets ready to leave and at that moment, he sees everyone putting down the decorations for the wedding. Rahul tries to stop them from putting down the decoration, but Abhi, who also accuses Rahul of having affair with and steal his to-be wife Anu, breaks friendship with Rahul and tells him to go away. Rahul also requests Abhi to marry Anu and keep her happy.

While Rahul is walking on his way to the train station, the bunch of goons he saved the family from, sticks a knife in him and he is taken to hospital. Kartik tells everyone at Abhi and Anu’s wedding that Rahul is hospitalized after attacked by the goons. He also sarcastically tells that he forgot that Abhi doesn’t like Rahul and learns that they are no more friends. Everyone, including Abhi, slowly leaves to go to the hospital, except Anu and her grandfather. Anu says that she will never disobey her grandfather and afterwards, they both went to hospital. In the hospital, Rahul wakes up to go in the station. When he is ready to go, he sees that everyone is outside his room. Finally everyone realises that Anu and Rahul are made for each other, so they get married at last and this is how the film ends.

Be the first to review “100% Love Dvd” Cancel reply