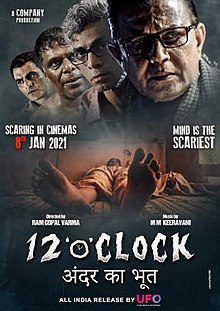 12 ‘o’ Clock revolves around a young girl Gauri who starts getting traumatised with frightening nightmares and incidents of eerie sleepwalking. What follows to extricate her from the possession forms the crux of the story.

12 ‘O’ Clock is a 2021 Indian Hindi-language horror film directed by Ram Gopal Varma and starring Mithun Chakraborty, Flora Saini, Manav Kaul, Krishna Gautam and Makarand Deshpande. The film was first announced with the name Geher, but the following trailer revealed it had been renamed 12 ‘O’ Clock on 3 July 2020. It was released to the public in India on 8 January 2021

Be the first to review “12 ‘O’ Clock dvd” Cancel reply