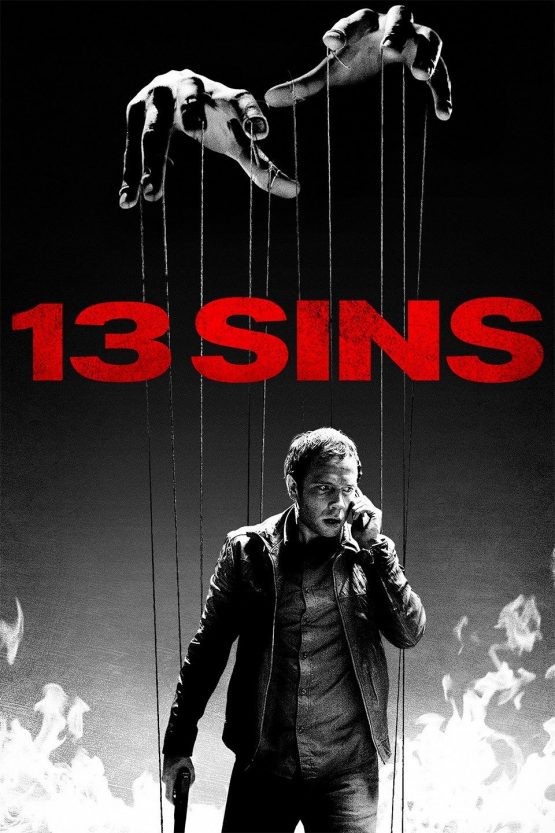 A desperate, debt-ridden salesman agrees to perform an increasingly hideous set of tasks in order to win millions of dollars.

13 Sins is a 2014 American horror-thriller film directed by Daniel Stamm. The film is a remake of the 2006 Thai comedy horror film 13 Beloved. Mark Webber stars as Elliot, a meek salesman who accepts a series of increasingly disturbing and criminal challenges. It premiered at the 2014 SXSW film festival and was released theatrically in the United States on April 18, 2014. This was the final film appearance of George Coe before his death in 2015.

Elliot Brindle, a meek salesman, loses his job despite his debt and the people who depend on him: Michael, his mentally handicapped brother; Shelby, his pregnant fiancée; and Samson, his abusive father. Elliot receives a mysterious phone call that offers him $1,000 to assertively kill a fly that has been harassing him. After Elliot checks his bank account online and sees that he has been credited, he accepts the next challenge: to eat the dead fly. The caller explains that he will be offered a series of thirteen challenges, each of which will result in greater rewards. If he fails to complete any of them, interferes in the game, or reveals the game, he will forfeit all the money, including any he already won.

The next few challenges attract police attention: making a young girl cry, arson, and scamming a homeless person with an ostrich. When the child identifies Elliot in the police station based on wanted posters, Detective Chilcoat takes over the case. Shelby becomes concerned about Elliot’s secretive and odd behavior, and he explains that he is planning a surprise. For his sixth challenge, Elliot is forced to take a corpse of a man who committed suicide out for coffee. Given a strict deadline, Elliot panics and brazenly steals a cup of coffee from a table of on-duty police officers. When confronted, Elliot notices that they are drinking alcohol and threatens to file a complaint which forces them to back off. Elliot is rewarded two challenge completions for this feat.

After he flees the scene, the caller tells Elliot that he has left behind his library card as evidence; however, if he wins the game, his record will be purged. At the same time, Chilcoat follows Vogler, a conspiracy theorist that has been investigating the game. Paranoid, Vogler flees Chilcoat but advises him to kill Elliot at his first opportunity. Chilcoat eventually tracks down Vogler at a bar and discuss that the game’s sole purpose is turning players into monstrosities at the promise of millions of dollars. Vogler states his wife once played the game, resulting in her eating their dog. For his next challenge, Elliot receives no instructions and is taken to a rural motel. There, a man identifies himself as a former childhood bully, and the caller tells Elliot to sever the man’s arm. Elliot initially refuses but does so once the man taunts him. After driving the man to the hospital, Elliot savagely beats the man’s brother, who was also involved in bullying Elliot and Michael, and once urinated on Michael’s face. As a result, he is credited with two more completed challenges.

When the police arrive at the banquet hall where Elliot and Shelby are having their rehearsal dinner, Elliot is surprised to discover that they are interested in Michael, who says he revealed himself to a young woman partially due to his medication being cut off. To give Michael time to escape, he accepts his next challenge, to destroy the banquet hall while singing The Internationale. Disappointed in his reluctance to break social norms, the caller then instructs Elliot to surrender to the police, from whom Elliot learns that another person has been playing the game while committing other acts such as pushing an elder down the stairs and burning down an entire shrine. Elliot takes and accidentally wounds a hostage to escape and complete the game before the other competitor. As he escapes, he’s forced to leave behind his cell phone. Desperate, he takes an old woman hostage when she shows up, sure that she is involved in his next challenge.

After feigning ignorance, the old woman reveals his next challenge: to set a stainless steel wire across the road. Elliot is horrified when he realizes that a group of bikers have been instructed to speed down the road. Although he disarms the trap in time, the other competitor arms a similar trap down the road, and the cyclists are decapitated. Disgusted and mortified, Elliot quits the game, tossing the phone away before he’s told the last challenge and, when he returns home, discovers that Michael is the other competitor. Michael reveals that the final challenge is to kill a family member. Although Elliot originally tries to talk Michael out of killing their father, Elliot becomes homicidal when their father reveals he won the game by killing their mother, which led to a miserable life despite his victory. To prevent his sons from experiencing the horror of losing everything closest to them from winning the game, Samson slices his neck and commits suicide.

However, Michael refuses to stop playing the game and attempts to kill Elliot. Elliot kills Michael in self-defense, though he is stabbed multiple times. Elliot is credited for his final challenge, but he forfeits all the money when he interferes with the game by shooting Chilcoat, who had murdered the conspiracy theorist and has now arrived to clean up the crime scene, thus revealing his involvement with the game. Later, Elliot learns that Shelby has declined to play the game, and he collapses laughing happily.

Be the first to review “13 Sins Dvd” Cancel reply