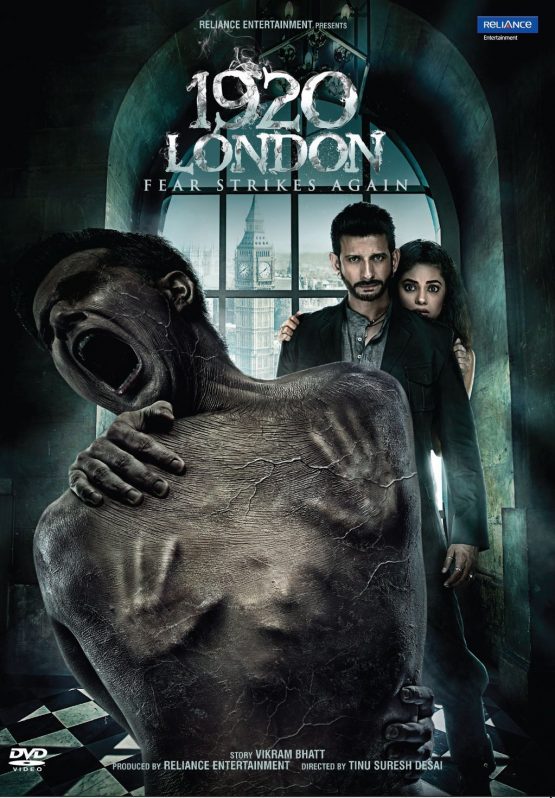 Shivangi, a princess, is married to Veer who gets possessed by an evil witch. She seeks the help of Jai, an exorcist and her ex-lover, to rid Veer of the dark influence.

1920 London is an Indian horror film directed by Tinu Suresh Desai. It is the third installment in the 1920 (film series), after 1920 and 1920: The Evil Returns. The film stars Sharman Joshi, Meera Chopra, and Vishal Karwal in lead roles. The film managed to recover its cost and became a moderate success but it couldn’t repeat the success of its previous installments, still it was followed by another installment titled 1921.

The film opens with the life of Shivangi, the princess of a royal house in Sikar, Rajasthan, now living in London with her husband Kunwar Veer Singh. They are a happy couple until one day when Veer develops a minor illness that soon flares up into a disease, shriveling his body and shrinking his head. Veer is hospitalized and his symptoms worsen – his body begins to contort unnaturally and he begins growling in strange languages. The doctors seem to diagnose it as tetanus, which is incurable. Shivangi is frightened; Veer is just not the same and Shivangi’s handmaiden, Kesar Ma deems it black magic.

Kesar Ma thinks it is because Veer’s father, the King, had two wives and the second wife wanted Veer, the heir, out of the way. The film moves to Rajasthan, where Shivangi and her family visit an exorcist for Veer’s condition. This exorcist attempts to confront the witch by entering the other realm, through a mirror, but is soon thrown out, too powerless for the witch. The exorcist refers the King to the most powerful spiritual master in the land, Mewar Baba, also known as Jai Singh Gujjar.

Shivangi shudders on hearing about Jai. She was deeply in love with Jai some years ago. Her uncle saw them together and tried to blackmail the helpless and beautiful Shivangi into sleeping with him. Jai stepped in between and fought off the uncle who promptly reported the matter to the King. Jai was charged with attempted murder. Shivangi inexplicably stood as witness against Jai and Jai was ultimately sent to jail for five years. Shivangi contacts Jai to help her save her husband. Jai flatly refuses but Shivangi pleads and persuades him to help, and Jai finally agrees to come to London.

Jai investigates the matter and discovers that Veer’s troubles began upon receiving a strange amulet as a gift from an unknown admirer in Rajasthan. The amulet transmitted the witch demon into Veer. Jai prepares Shivangi into reciting a spiritual chant to bind the witch to their mansion so Jai can throw the locket into the Thames river, thereby freeing Veer. Shivangi maintains the chant over the witch’s attempt to thwart it and Jai finishes the task. However, it is revealed that the amulet and the witch were actually dispatched by Jai, and as he prepares to leave London, Shivangi confronts him, asking him how he knew the source of the amulet. Jai admits his vengeance saying that he wanted Veer dead. Shivangi reveals why she had betrayed him many years ago: When their affair was revealed, the King had ordered Jai killed. Shivangi had begged for his life and it was granted for the price of her betrayal. Now guilty and dismayed, Jai resolves to stay in London and free Veer from the witch.

Jai prepares his final assault on the witch. Jai invokes his own spiritual master through a letter. The master chastises Jai for acting in haste and then regretfully says that the witch will not leave without taking a soul. The master directs Jai to an abandoned church where he receives a set of charmed Celtic daggers. Jai prepares a charm to attack the witch. He enters the witch’s realm through a mirror and recovers the amulet. The witch attacks ferociously and is about to stop Shivangi when Jai smashes the mirror, closing the portal and trapping himself in the realm, so Shivangi can burn the amulet and free her husband. Shivangi sees Jai smile peacefully from a last shattered piece of the mirror before it breaks as Veer comes to life. Some weeks later, Veer and Shivangi find the letter of correspondence between Jai and his master. Jai had offered his soul so Veer could be freed. Veer is touched and places Jai’s photograph upon his mantelpiece as the film ends.

Be the first to review “1920 London Dvd” Cancel reply