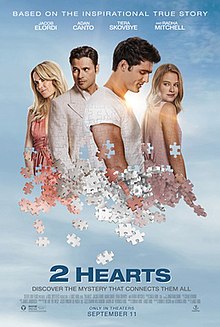 For two couples the future unfolds in different decades and different places, but a hidden connection will bring them together in a way no one could have predicted.

2 Hearts is a 2020 American romantic drama film directed by Lance Hool and starring Jacob Elordi, Adan Canto, Tiera Skovbye and Radha Mitchell. It is based on the true story of Leslie and Jorge Bacardi and Christopher Gregory.The film was theatrically released in the United States on October 16, 2020, receiving generally negative reviews from critics.

Be the first to review “2 Hearts dvd” Cancel reply