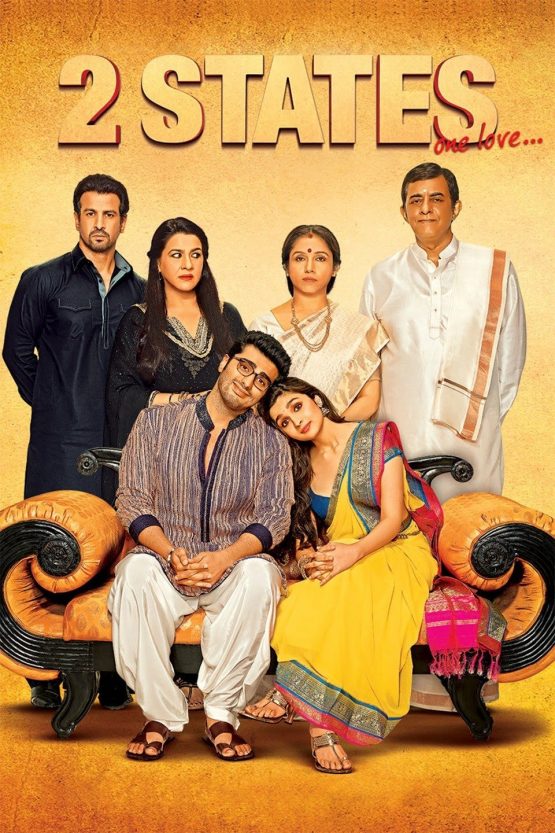 Coming from two very different cultural backgrounds, Krish and Ananya try to convince their parents to bless their relationship before they get married.

2 States is a 2014 Indian Hindi-language romantic-comedy drama film written and directed by Abhishek Varman, marking his directorial debut. An adaptation of Chetan Bhagat’s 2009 novel with the same name, it is produced by Karan Johar and Sajid Nadiadwala under their respective banners Dharma Productions and Nadiadwala Grandson Entertainment. The film stars Arjun Kapoor and Alia Bhatt, with Amrita Singh, Ronit Roy, Revathi and Shiv Kumar Subramaniam portraying supporting roles. Distributed by UTV Motion Pictures, it was released worldwide on 18 April 2014, receiving positive reviews. The music of the film was composed by Shankar–Ehsaan–Loy. A major box-office success, it grossed ₹1.75 billion (US$25 million) worldwide against its ₹360 million (US$5.0 million) budget. At the 60th Filmfare Awards, the film was nominated in eight categories including Best Film, Best Director (Varman), Best Supporting Actor (Roy), Best Supporting Actress (Singh) among others, and won two: Best Debut Director (Varman) and Best Music Director (Shankar-Ehsaan-Loy).

Krish Malhotra, a fresh Engineer from IIT Delhi, now a student pursuing his MBA at the IIM Ahmedabad, Gujarat, comes from a troubled, rich family of Punjabi Hindu origin based in Delhi. His mother Kavita Malhotra is often beaten by his father Vikram Malhotra. He meets his classmate Ananya Swaminathan, economics topper in her college, who comes from a conservative Tamil Hindu Brahmin family. Ananya is a beautiful girl. Krish and Ananya, initially quarrel, but soon become friends and start studying together. Ananya, though an economics topper is unable to answer simple questions to her professor who chides her in turn. Ananya finds that Krish is a genius and starts taking his help in academics. Krish is attracted to Ananya and could not control himself, so one day he tells Ananya that either they end their friendship or she kisses himself because while close to her Krish is distracted too much to her for him to focus on studies. Soon they begin dating, and stay together for their next 22 months on the IIM campus. Krish confides in Ananya that his real passion is writing, which he wants to pursue a career in. They both have become close to each other and fall for each other during the stay in IIM. Krish gets selected in the campus drives for Yes Bank. He immediately rushes to the next room and proposes to Ananya, in the middle of her interview. She accepts and then gets selected for Sunsilk.

When they complete their graduation, Krish and Ananya decide to get married. They introduce their parents to each other at the convocation ceremony. To their dismay, Krish’s loud Punjabi mother Kavita does not get along with Ananya’s reserved Tamil parents Radha, and her husband. After graduation, Ananya begins her marketing job in her hometown Chennai and Krish goes back to his own hometown Delhi, with the choice of workplace in his own hands. Krish’s brash family urges him to stay in Delhi and try to discourage him from his interest in writing. They also criticize his relationship with Ananya, and tell him to get into an arranged marriage with a Punjabi girl. It is also evident that there is tension between Krish and his rich alcoholic father Vikram.

Krish, unable to get over Ananya, leaves his dysfunctional family and shifts his job to Chennai. During this time, he tries very hard to win over Ananya’s family. He initially steps on the rangoli at the entrance of their house and, unintentionally, messes it up; which upsets Ananya’s father. Gradually, over a period of time, he builds rapport with the family. He tutors her younger brother for the IIT entrance, gets her mother an opportunity to sing for an event at his workplace and helps his father create his first PowerPoint presentation.

With his efforts, when Krish symbolically proposes to each member of the family, Ananya’s family agrees to the marriage. Krish and Ananya then travel to Delhi to win over Krish’s family. Initially, Kavita and her family are hostile towards Ananya but slowly come to like her after she saves Krish’s cousin’s wedding from being canceled due to dispute over excessive dowry.

Krish and Ananya decide to take a vacation in Mumbai with their families before the wedding. The vacation does not go as planned when Kavita makes continuous snide remarks about Tamilian culture. Furthermore, Ananya and her parents overhear Krish falsely assuring his mother that she can treat Ananya however she wants after they are married. Having had enough of the insults, Ananya breaks up with Krish and both go their separate ways.

Krish and Ananya find it hard to live without each other. Krish becomes a workaholic and becomes depressed and starts writing about his story with Ananya. He also visits her in Chennai where she warns him to stop communication. Sometime later, he gets a call from Ananya, who reveals that Krish’s father had secretly come down to Chennai to speak to her parents, apologising for his wife’s shallow behavior, in an effort to change their decision. This allows for Krish and Ananya to finally get married, with Krish and his Punjabi family traveling by train to Chennai for the wedding. His father initially says that he will not attend the wedding to prevent any further embarrassment, but at the last minute he flies down to Chennai with Krish seeing his rental car outside of the hotel and to the surprise of his mother, announcing that his father has come to the wedding during an argument with the priests due to the absence of the father. Krish’s father apologizes to his mother for his abusive behaviour over the years.

After getting married, Ananya gives birth to twin boys. Krish resigns from his job at the bank and, publishes his book 2 States based on his and Ananya’s life.

Be the first to review “2 States Dvd” Cancel reply