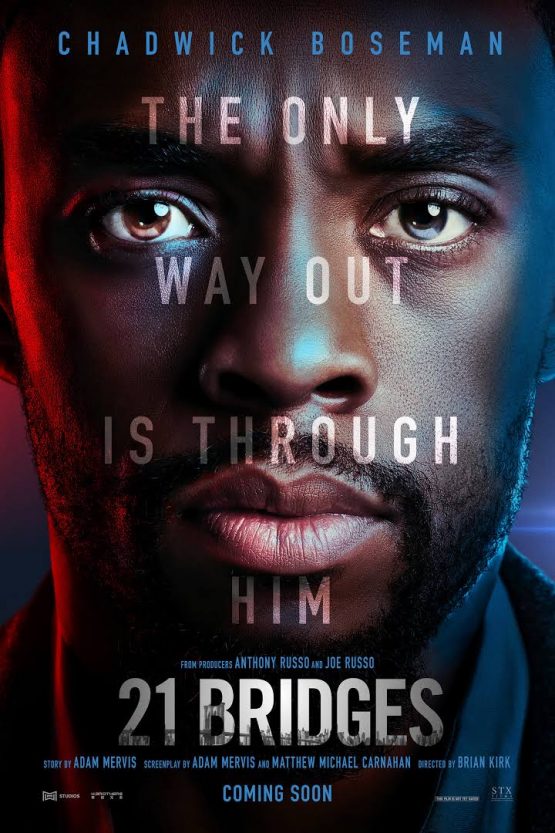 After uncovering a massive conspiracy, an embattled NYPD detective joins a citywide manhunt for two young cop killers. As the night unfolds, he soon becomes unsure of who to pursue — and who’s in pursuit of him. When the search intensifies, authorities decide to take extreme measures by closing all of Manhattan’s 21 bridges to prevent the suspects from escaping.

21 Bridges was theatrically released in the United States on November 22, 2019 by STXfilms. It received mixed reviews from critics and grossed $49 million worldwide on a $33 million budget.

Andre Davis is a successful NYPD officer like his father, who was murdered on duty when Davis was 13. Struggling with his father’s legacy, Davis has earned a reputation for pursuing and killing “cop-killers” for years, although he claims they were all in self-defense and is uncomfortable with the label.

One night, Michael Trujillo and Ray Jackson, two small-time criminals and war veterans, attempt to steal several kilograms of cocaine from a winery. They find more cocaine than they were expecting, and when police officers arrive, Ray guns them down in a shootout. Michael chastises Ray for putting them in jeopardy by killing the officers. Assigned to the case, Davis and narcotics detective Frankie Burns come into conflict with FBI agents, who attempt to take it over. With the reluctant approval of the deputy mayor, the FBI, and the precinct’s head, Captain McKenna, Davis asks for the island of Manhattan to be locked down, on the condition that they catch the criminals before 5 a.m.

Ray and Michael coerce their liaison, Bush, to persuade their handler to give them a bigger cut in exchange for their identities changed for their escape. They are given more money and their fixer, Adi, gives them new identities and tells them to depart for Miami the next morning. Davis and Burns manage to identify Ray, Michael, and Bush. Bush is gunned down by Butchco and Dugan, who get there first. After catching Butchco planting his backup sidearm on Bush’s body and briefly scuffling with him, Davis becomes more suspicious when a team of police led by Lieutenant Kelly quickly manages to locate Adi’s apartment. Adi is mortally wounded by the policemen but manages to give Michael two flash drives and their password.

Davis and Burns manage to catch up to Michael and Ray; after accidentally killing a civilian, Ray is fatally wounded by Davis. Michael holds Burns at gunpoint, telling Davis about the drives and how suspicious everything is, before escaping. Burns chastises Davis for letting Michael escape despite Davis’ reputation. Michael hides in a hotel room, where he unlocks the contents of the drive and realizes that McKenna’s precinct was involved in trafficking the drugs from the winery and earning profits for it, and that all seven of the cops he and Ray had killed in the shootout had been corrupt. After another chase where Michael abandons his money, Davis manages to corner him in a subway train and convinces him to surrender, promising to keep him alive. Michael is suddenly shot by Burns, who had also boarded the train and claimed that she thought Michael was still holding Davis at gunpoint. Davis berates her for shooting Michael, who secretly hands over the drives, along with the password, to Davis before dying. As the police congratulate the two for their efforts, Davis discovers that Burns had contacted Kelly before Adi’s apartment was raided.

The next morning, McKenna arrives at his home to find Davis holding him at gunpoint, having accessed the drives. McKenna reasons that the officers were struggling to survive on a measly pay, which forced them to go into drug trafficking, but Davis refuses to walk away. McKenna, along with an arriving Butchco, Dugan and Kelly – who were all on McKenna’s payroll – open fire on Davis. Davis kills all of them, including McKenna, who refuses to surrender. Burns, whom Davis deduced was also allied with McKenna, appears from behind and holds Davis at gunpoint, but surrenders after Davis reveals that he had already leaked the information online, exposing all the corrupt cops in New York, and reasons that her daughter would live without her mother should she get a life sentence for killing him.

In the aftermath, Davis solemnly drives along the Manhattan Bridge in the sunset, taking the drives with him.

Be the first to review “21 Bridges Dvd” Cancel reply