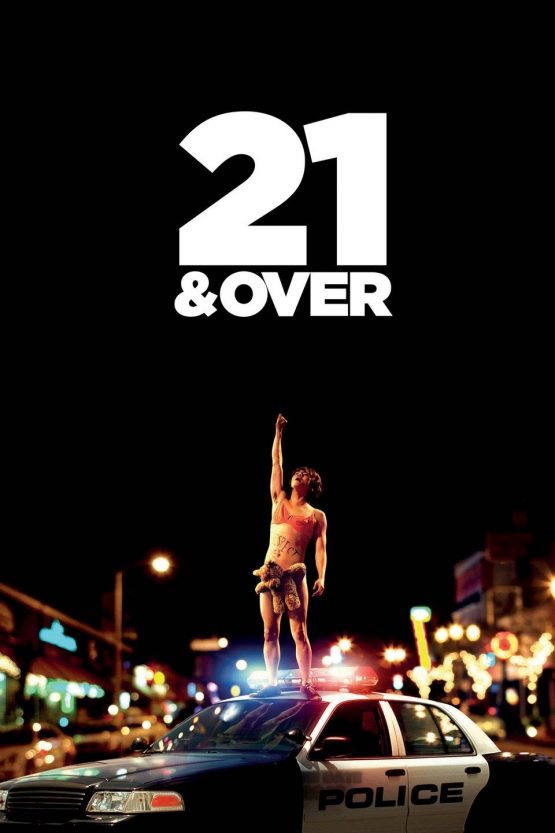 The night before a crucial medical school interview, Jeff and his friends head out for drinks to celebrate his 21st birthday. But, the night turns into one filled with overindulgence and debauchery.

21 & Over is a 2013 American comedy film written and directed by Jon Lucas and Scott Moore, in their directorial debut. The film stars Justin Chon, Miles Teller, and Skylar Astin, and follows a trio of friends who go out drinking to celebrate one of their 21st birthdays despite having a medical interview the following morning. The film was released on March 1, 2013, received generally unfavorable reviews from critics and grossed $48 million.

Casey and Miller invite their college friend, Jeff Chang, out to celebrate his 21st birthday. Jeff declines, citing an important medical school interview early the next morning that his domineering doctor father arranged; Jeff finally agrees to having one drink.

At a bar, Jeff accidentally hits a guy with a game dart, infuriating him. The trio flee, interrupting Casey’s chat with Jeff’s attractive friend, Nicole. Enthused about drinking legally, Jeff over imbibes and passes out. Casey and Miller want to take Jeff home but forget where he lives.

Thinking that Nicole knows Jeff’s address, they sneak into what they believe is her sorority house, only to discover it is a Latina one. Upstairs, they encounter two blindfolded pledges undergoing an initiation ritual. Miller paddles the girls’ buttocks and orders them to make out. Upon realizing they were tricked, the entire sorority is furious. Casey and Miller escape, first tossing Jeff from an upstairs balcony onto a covered pool. Bouncing off uninjured, a drunken Jeff wants to continue partying.

The boys locate Nicole at a pep rally. She refers them to her boyfriend, Randy, the angry guy from the bar. When he refuses to look up the address in his phone, the guys steal it. Jeff no longer lives at that address but a party is in progress there. While searching for somebody who knows Jeff’s address, Casey and Miller leave him alone with two stoners. For fun, they strip Jeff, write “Douche Bag” on his forehead and glue a teddy bear to his crotch. Jeff wanders into the street, causing a commotion. The police apprehend and transfer him to the campus health center.

As Casey and Miller head to the clinic, the vengeful Latina sorority girls abduct them. The guys find themselves in a ritualistic setting, stripped and shackled to the floor. They are forced to endure what they tricked the two pledge girls into doing. Embarrassed, bruised, and sporting bright-red spanked buttocks, they are released and walk across campus wearing only tube socks over their genitals. Casey blames Miller’s immaturity for their predicament, unleashing long-simmering mutual resentments that culminates in a brawl.

At the health center, Casey and Miller discover Jeff is on a 24-hour hold due to a previous suicide attempt. They encounter Nicole. She is there with Randy, who was injured at the pep rally, though she has just broken up with him.

Casey and Miller eventually deduce where Jeff lives and smuggle him out of the clinic. Jeff, groggy and barely sober, steals Randy’s truck, fleeing in it with Miller and Casey. Randy and his buddies, and also the police, chase them until the vehicle careens down an embankment, losing the pursuers.

The boys arrive at Jeff’s apartment with barely enough time to prepare him for the interview. Randy arrives, threatening the boys, but Jeff’s father shows up and turns the tables on Randy. Encouraged by Casey and Miller, Jeff confronts his father, saying he does not want to be a doctor. Dr. Chang berates him until Jeff orders him to leave, surprisingly earning him Randy’s respect, who resents his own domineering father. Casey, meanwhile, realizes he has fallen for Nicole and goes after her.

Three months later, Miller, a college dropout who was an intelligent but academically lazy student, applies to the university. Casey is dating Nicole. Jeff is pursuing music and has a girlfriend.

Be the first to review “21 & Over Dvd” Cancel reply