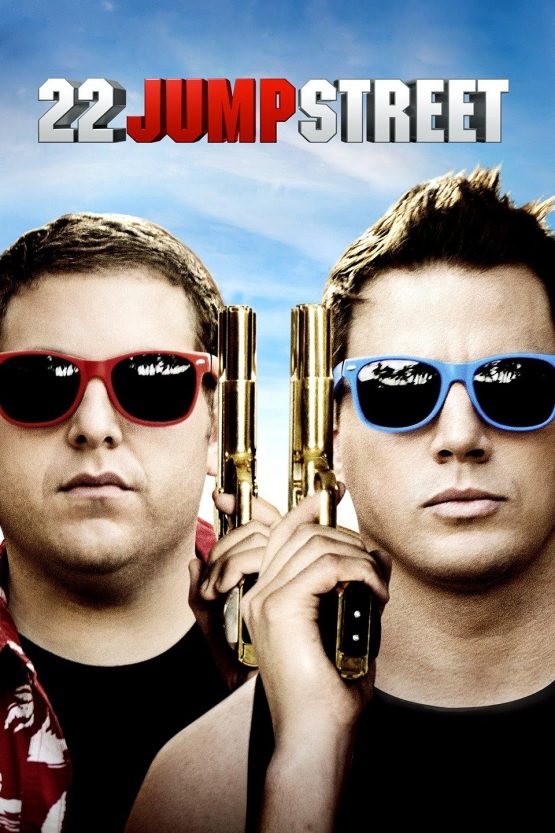 Schmidt and Jenko, two undercover cops, are sent on a mission to a college to investigate the use of a recreational drug known as WHYPHY. Their bond is tested when Schmidt befriends a girl, Maya.

22 Jump Street is a 2014 American buddy cop action comedy film directed by Phil Lord and Christopher Miller, written by Jonah Hill, Michael Bacall, Oren Uziel and Rodney Rothman and produced by and starring Hill and Channing Tatum. Ice Cube, Peter Stormare, Jillian Bell, Amber Stevens, and Wyatt Russell also star. It is the sequel to the 2012 film 21 Jump Street, which is in turn based on the television series of the same name. The plot follows police officers Schmidt and Jenko as they go undercover at a college in order to find the supplier of a new drug.

Plans for a Jump Street sequel began the week of the first film’s release. Hill and Tatum were quickly confirmed to be reprising their roles, while Miller and Lord announced they’d be returning to direct in July 2013. Filming took place from September to December 2013 in New Orleans, Louisiana, as well as San Juan, Puerto Rico.

Two years following their success in the 21 Jump Street program, Schmidt and Jenko are back on the streets chasing narcotics. However, after failing in the pursuit of a group of drug dealers led by The Ghost, Deputy Chief Hardy puts the duo back on the program to work for Captain Dickson – now located across the street at 22 Jump Street. Their assignment is to go undercover as college students and locate the supplier of a drug known as “WHY-PHY” (Work Hard? Yes, Play Hard? Yes) that killed a student photographed buying it on campus from a dealer.

At college, Jenko quickly makes friends with a pair of jocks named Zook and Rooster; they later become the prime suspects of the investigation. Jenko starts attending parties with the jocks who do not take as kindly to Schmidt. Meanwhile, Schmidt gets the attention of an art student, Maya, by feigning an interest in slam poetry. The two sleep together, to the disapproval of Maya’s roommate Mercedes, and Schmidt later finds that Maya is the daughter of Captain Dickson, whom Schmidt bragged to about “getting laid”, much to Dickson’s fury. Despite sleeping together, Maya tells Schmidt not to take it seriously, and he starts to feel left out as Jenko bonds more and more with Zook who encourages him to join the football team.

When Schmidt and Jenko are unable to identify the dealer, they visit Mr. Walters and Eric in jail for advice. After confessing the two are having regular intercourse, Walters points out a unique tattoo on the arm of the dealer in the photograph. Whilst hanging out with Zook and Rooster, Jenko notices that Rooster does not have the tattoo but sees it on Zook’s arm. Schmidt and Jenko are invited to join the fraternity led by the jocks, but Schmidt refuses, furthering the tension between the two as Jenko passes their requirements. They later realize that Zook is not the dealer but rather another customer. Soon afterwards, they find The Ghost and his men on campus, but The Ghost again evades them. Jenko reveals to Schmidt that he has been offered a football scholarship with Zook and is uncertain about his future as a police officer. Afterwards, Schmidt reveals his true identity and moves out of the dorm, angering Maya.

Spring break arrives, and Schmidt goes after The Ghost. He is joined by Jenko, so the two can have one final mission together. The pair head to the beach where The Ghost is likely to be dealing WHY-PHY. Inside a bar, they find Mercedes, who is The Ghost’s daughter, giving instructions to other dealers. The pair, backed up by Dickson and the rest of Jump Street, ambush the meeting. The Ghost flees, while Mercedes is knocked out by Schmidt. While pursuing The Ghost, Jenko is shot in the shoulder. The Ghost attempts to escape in a helicopter; Schmidt and Jenko manage to jump across to it, but they fall into the sea and Jenko is able to throw a grenade into the helicopter. The Ghost celebrates his victory prematurely while the grenade explodes, sending the totaled remains into the sea. Jenko tells Schmidt that he still wants to be a police officer as he believes their differences help their partnership, and the two reconcile in front of a cheering crowd. Dickson approaches them claiming to have a new mission undercover at a med school.

During the credits, Jenko and Schmidt go on to a variety of undercover missions to different schools, which are portrayed as 22 fictional sequels, an animated series, a video game, and a toy line. One mission features Detective Booker while another sees the return of The Ghost, who survived the helicopter explosion. In a post-credits scene, Walters reveals to Eric that he is late, implying he is pregnant with his baby, much to Eric’s horror.

Be the first to review “22 Jump Street Dvd” Cancel reply