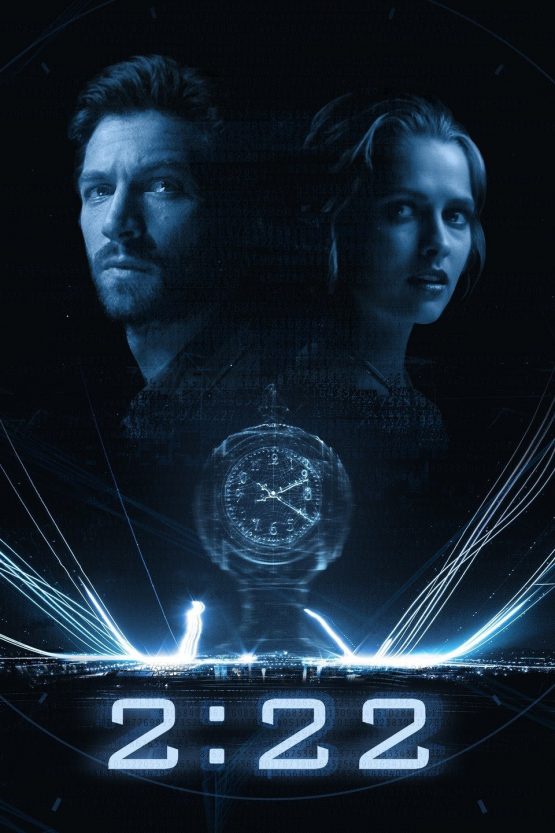 Two planes almost collide after a blinding flash of light paralyzes air traffic controller Dylan Branson for a few seconds. Suspended from his job, Dylan starts to notice a repetition of sounds and events in his life at exactly the same time every day. An underlying pattern soon builds, drawing him into New York’s Grand Central Station daily at 2:22 p.m. Now drawn into a complex relationship with a woman, Dylan must figure out a way to break the power of the past and take control of time itself.

2:22 is a 2017 American-Australian science fiction thriller film directed by Paul Currie, written by Nathan Parker and Todd Stein, and starring Michiel Huisman, Teresa Palmer and Sam Reid. The film’s plot involves air traffic controller Dylan Branson, who, thanks to a mysterious anomaly at 2:22, prevented the collision of two aircraft and met Sarah, whose destinies appear to be tied to the time 2:22. The film was released in theaters and on VOD on June 30, 2017.

Dylan Branson works as an air traffic controller at JFK Airport. One morning he sees a TV news announcement that a supernova 30 light years from Earth can be now be observed in the sky.

Dylan has a recurring dream of a shooting taking place at Grand Central Station in New York, at exactly 2:22 pm. A few days later, at 2:22 pm, while Dylan is at work, he begins to hallucinate, seeing star constellations and patterns instead of his surroundings at the airport. He breaks out of this fugue state only just in time to prevent a collision between two planes. Following this, Dylan is suspended from work.

Dylan begins to notice a pattern whereby the same things happen to him at the same time every day, and by 2:21 he somehow always arrives at Grand Central Station, where – although the individuals themselves differ, he always sees the same type of people – a businessman reading a newspaper, an older couple embracing, a party of school children, and a pregnant woman standing alone under the clock. And always at exactly 2:22 there is an electrical malfunction which causes glass to shatter.

Meanwhile, he meets a woman named Sarah, who was a passenger on one of the planes which almost collided. Dylan and Sarah immediately feel as if they have known each other for many years and also learn that they were born on the same day. They fall in love and begin an affair.

Sarah works at an art gallery; one of the exhibiting artists is her ex-boyfriend Jonas, who still has feelings for Sarah. She wears a pendant Jonas crafted for her as a birthday present.

One evening Dylan attends Sarah’s gallery to see an exhibition of Jonas’s work, a holographic depiction of New York, which includes the interior of Grand Central. Dylan is astonished that the holograph depicts the same events he saw in his recurring dream. He accuses Jonas of stalking him and having created the hologram deliberately to destabilise him; Jonas doesn’t understand what Dylan is talking about and they fight. Sarah is very upset and asks Dylan to leave.

The next day Dylan visits another art exhibition hosted by one of the visitors at Sarah’s gallery. The exhibition consists of photograph-based artwork of murders committed in NYC, and in one of the photographs Dylan sees a couple from his dream. The gallery owner tells Dylan the story – that of a young woman, Evelyn Mills, who was killed by her lover at Grand Central Station. The lover also shot a policeman before being killed himself.

By chance, Dylan finds a packet of old letters and a passport hidden behind a ceiling beam in his apartment, which reveal that a man called Jake Redmond once lived in the apartment; the letters are love letters to Jake from Evelyn Mills.

Dylan tracks down the sister of Evelyn Mills, Catherine. She tells Dylan how Evelyn fell deeply in love with Jake, with whom she shared a birthday. A detective visited Evelyn to tell her that Jake was a criminal, but she refused to believe him. Catherine says that she thinks the detective, Noah Marks, was himself in love with Evelyn. Noah was the policeman who was killed by Jake at Grand Central Station, 30 years before. Catherine is wearing her dead sister’s necklace, which Dylan notices is identical to the one which Jonas made for Sarah.

Dylan believes the supernova 30 years before created a “cosmic cataclysm” which means he and Sarah are destined to relive the fates which befell Jake and Evelyn on that day. Sarah tries to persuade him it is his imagination, but he is convinced that if they stay together, he will kill her the following day, the anniversary of the Grand Central murders. He tells Sarah that, for her safety, they cannot meet again. A distressed Sarah confides in Jonas, who persuades her to go away with him.

The next day, his 30th birthday, Dylan struggles to find what he believes is a missing piece of the puzzle. He breaks into Jonas’s studio, where he finds dozens of depictions of Sarah, evidencing Jonas’s obsession with her. There is also an empty gun case, and Dylan finally realises that Jonas is destined to relive the part of Detective Noah Marks. As the time approaches 2:22, Dylan rushes to the station.

Meanwhile, at Grand Central, Jonas goes to buy tickets while Sarah waits under the clock. She begins to see the same characters that Dylan described to her, and finally realises that she is the pregnant woman under the clock. When Jonas returns, she tells him she loves Dylan and cannot leave. In a jealous rage, Jonas pulls a gun, but Dylan arrives in time to block Sarah’s body with his own, taking the bullet himself. Jonas is then killed by the police.

It transpires that Jake did not kill Evelyn (who was herself pregnant) but that the pair of them were shot by Noah Marks, who was in love with Evelyn; Jake was framed for the murders by the police.

In the final scenes, Dylan has recovered and now works as a pilot. He and Sarah live happily with their baby.