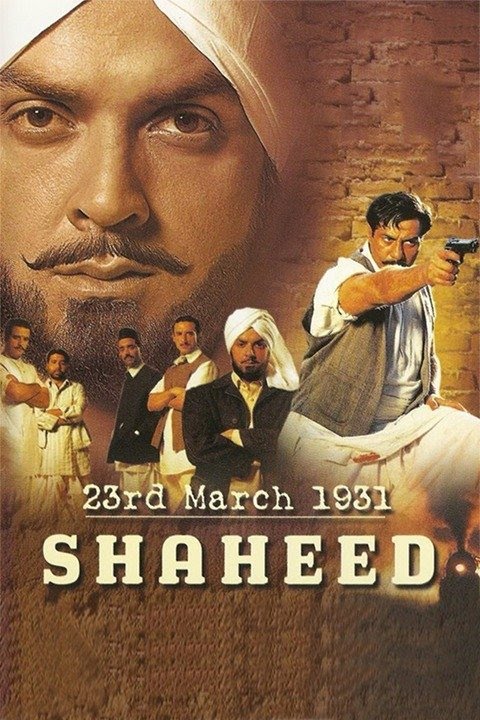 Bhagat Singh, a freedom fighter, is arrested for killing the British official responsible for the death of his mentor Lala Lajpatrai. He is ultimately hanged for his misdeed.

23rd March 1931: Shaheed is a 2002 Indian Hindi historical biographical film about Bhagat Singh, directed by Guddu Dhanoa which depicts the events leading up to the hanging of Indian freedom fighter Bhagat Singh and his companions Rajguru and Sukhdev on 23 March 1931. The film stars Bobby Deol as Bhagat Singh, his elder brother Sunny Deol as Chandrashekhar Azad and Amrita Singh in her comeback role as Bhagat Singh’s mother.

Set in the mid-1920s, British India, the film tells the story of freedom fighters Bhagat Singh and Chandrashekhar Azad who have only one motive in mind: Freedom for India. They set about doing this task together with two other men, Sukhdev and Rajguru. Bhagat Singh is enraged when his mentor Lala Lajpat Rai is mercilessly beaten to death by the police, and he sets about to avenge his death. He and his colleagues do succeed in killing one of the officials responsible, but they are identified and as a result Bhagat and Rajguru are arrested and held in prison where they are tortured relentlessly.

When produced in court, they dramatically admit to the killing and claim that it was done in the name of Freedom. The judge and the public prosecutor do not see it that their way and they are sentenced to life in prison. Bhagat’s mother, Vidya, comes to meet him in prison, and he goes to greet her, shackled in chains from head to toe, and he foretells that India will continue to suffer, even after Independence from the British, and that he will return in another birth to free his motherland. Subsequently, all three are charged with treason and assassination and are sentenced to death.