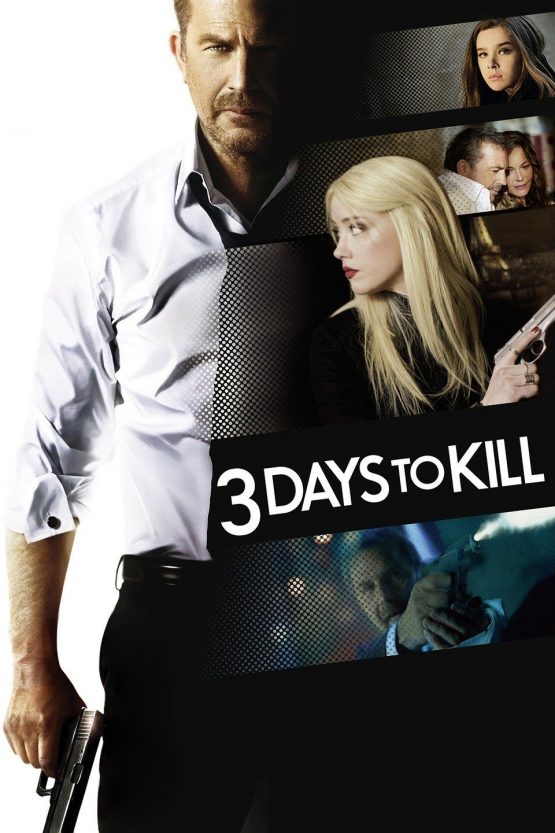 After being diagnosed with a terminal illness, spy Ethan Renner decides to give up his career. However, before that, he is tasked to nab a terrorist while looking after his teenage daughter.

3 Days to Kill is a 2014 action thriller film directed by McG and written by Luc Besson and Adi Hasak. The film stars Kevin Costner, Amber Heard, Hailee Steinfeld, Connie Nielsen, Richard Sammel, and Eriq Ebouaney. The film was released on 21 February 2014. The film received mixed reviews and grossed $52.6 million against its $28 million budget.

American CIA agent Ethan Renner (Kevin Costner) works with a team to capture the Albino, the lieutenant to an arms trafficker (called the Wolf) who is selling a dirty bomb to terrorists in a hotel in Belgrade.[6] The Albino deduces the trap when he recognizes one of Renner’s fellow agents (disguised as a chambermaid), whom he kills. Renner, suddenly dizzy as he pursues The Albino, only manages to cripple him by shooting him in the leg, then blacks out, allowing the Albino to escape. Meanwhile, elite CIA assassin Vivi Delay (Amber Heard), a “Top Shelf agent”, has been personally assigned by the Director to kill the Wolf. Vivi monitors the operation and suspects Renner has unknowingly seen the Wolf.

Renner is nearly disabled by an extreme cough, which is diagnosed as terminal brain cancer that has spread to his lungs. He is given only a few months to live, and will not see the next Christmas. For decades he has kept his dangerous career a carefully guarded secret from his wife Christine (Connie Nielsen) and daughter Zooey (Hailee Steinfeld), at the cost of losing them. He decides to spend his remaining time trying to fix his relationship with his estranged daughter, and if possible, his ex-wife. He returns to Paris, where he and his family live separately, to find the Réunion family of Jules is squatting in his apartment. He is told by the police that he is not permitted to evict indigent squatters until after the winter. He makes an awkward reconnection with Christine, and tells her of his terminal illness. She allows him to reconnect with Zooey, and when she has to go out of the country on business, she agrees to let him look after Zooey.

Vivi recruits him to find and kill the Wolf, in exchange for an experimental drug that could extend his life significantly. Renner reluctantly accepts, to get more time with his family. Vivi tells him the way to trap the Wolf is by getting the Albino, in turn by getting his accountant, in turn by kidnapping the gang’s limousine driver. All the while Renner is fighting the hallucinogenic effect of the medicine, which occurs whenever his heart rate goes too high, and which he can only control by consuming alcohol. He must also deal with Zooey’s school problems, including her habit of lying so she can sneak out partying. He manages to keep her out of trouble, and slowly reestablishes a father relationship with her, which impresses his wife.

He tracks the Wolf and the Albino into the subway, but they gain the upper hand when he is disabled by the hallucinations. The Albino attempts to kill him by pushing him in front of an oncoming train, but Renner manages to push the Albino on the track instead. The Wolf escapes, then contacts a business partner who can help him to flee the country.

The family is invited to a party thrown by Zooey’s boyfriend’s father, who happens to be the Wolf’s business partner. Renner manages to protect Christine and Zooey, kill all the Wolf’s men, and trap the Wolf in an elevator before breaking the cables, causing the cabin to free-fall to the ground. The Wolf survives, severely injured, but Renner is again disabled and, also feeling guilty for all the damage his work has done to his family, he’s suddenly unable to pull the trigger, and drops his gun where the Wolf can get it. Vivi intervenes and kicks the gun back to Renner, telling him to finish the job and kill the Wolf, but he decides not to, because “I promised my wife I’d quit.” Vivi then kills the Wolf.

At last retired, Renner survives to Christmas, which he is spending at a beach house with Zooey and Christine. He discovers a small, red wrapped gift package, which contains another vial of the cancer medicine. Vivi is seen on a hill behind the house smiling as Renner opens the package.