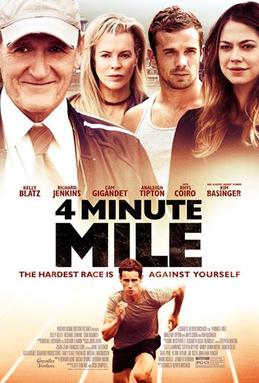 A former track coach decides to train a student with natural athletic talent. Tragedy strikes, forcing the student to confront everything that has been holding him back.

The film premiered at the Seattle International Film Festival (SIFF) on June 5, 2014. Gravitas planned for a theatrical release on August 1, 2014.

Drew Jacobs (Kelly Blatz), a teenage track runner who lives with his mother Claire (Kim Basinger) and older brother Wes (Cam Gigandet), is overwhelmed and struggling with life. He is manipulated by a local drug dealer, Eli (Rhys Coiro), into running drug payments, and fears that he is heading down the same fruitless life path his brother once took as Drew finds the fate of his primary outlet, track practice, up in the air. Drew, however, is soon noticed by his reclusive neighbor and ex-track coach, Jame Coleman (Richard Jenkins), who offers to train him. As Drew trains, the two form a bond, until Coleman is killed in an altercation with his brother’s old gang, forcing Drew to conquer his fears and push through himself.

Be the first to review “4 Minute Mile Dvd” Cancel reply