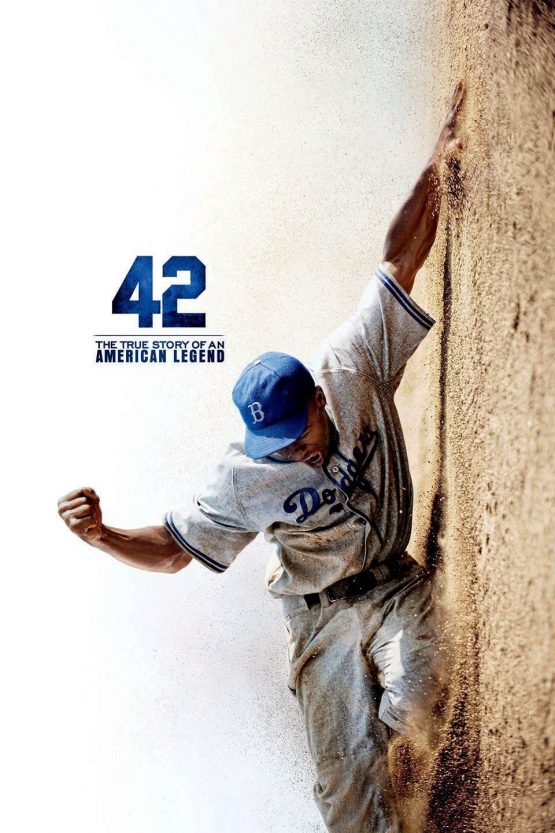 Major League executive Branch Rickey drafts African American Jackie Robinson as a player. Jackie has never taken too kindly to racism, but now he is amidst even greater racist hostility.

In 1945, sportswriter Wendell Smith suggests that Brooklyn Dodgers owner Branch Rickey consider Jackie Robinson as the black ballplayer Rickey is looking for. Robinson and his team, the Kansas City Monarchs, stop by a gas station. When the attendant refuses Robinson entry to the washroom, Robinson says they will find another station at which to fill up the team bus, and the attendant relents. As Robinson steps out, a scout for the Dodgers sent by Rickey approaches him and invites him to Brooklyn. He is offered a $600 per month contract and a $3,500 signing bonus, which Robinson accepts after being warned by Rickey that he must control his temper if he wants to play. Robinson proposes to his girlfriend, Rachel, by phone and she accepts.

During spring training, Robinson earns a roster spot with the Montreal Royals, the AAA affiliate of the Brooklyn farm system. After a great season there and spring training in Panama, he advances to the Dodgers. Many of the players soon sign a petition, stating they refuse to play with Robinson, but manager Leo Durocher insists Robinson will play with the main team, and they relent. When Durocher is suspended by Happy Chandler, the Commissioner of Baseball, for actions in his personal life, leaving the Dodgers without a manager to start the regular season, Burt Shotton agrees to manage the team.

In a game against the Philadelphia Phillies, manager Ben Chapman taunts Robinson, causing him to go back to the dugout and smash his bat out of frustration. With encouragement from Rickey, Robinson then returns to the field and hits a single, steals second base and advances to third on a throwing error, and scores the winning run. When Chapman’s behavior toward Robinson generates bad press for the team, Phillies’ general manager Herb Pennock requires him to pose with Robinson for newspapers and magazine photos prior to the next game between the two teams.

Later, Robinson’s teammate Pee Wee Reese comes to understand what kind of pressure Robinson is facing, and makes a public show of solidarity, standing with his arm around Robinson’s shoulders before a hostile crowd at Crosley Field in Cincinnati, silencing them.

In a game against the St. Louis Cardinals, Enos Slaughter “accidentally” spikes Robinson on the back of the leg with his cleats while running to first base.

Robinson’s home run against Pittsburgh Pirates pitcher Fritz Ostermueller, who had earlier hit him in the head, helps clinch the National League pennant for the Dodgers, sending them to the World Series, which they would lose to the New York Yankees.

Be the first to review “42 Dvd” Cancel reply