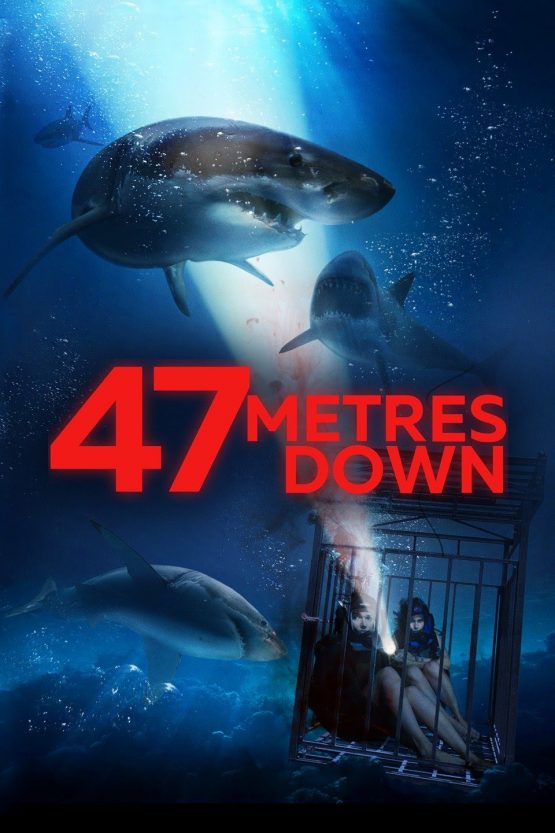 A vacation turns into a disaster after two sisters, Lisa and Kate, are trapped in a diving cage underwater with predatorial sharks circling them.

47 Meters Down is a 2017 survival horror film directed by Johannes Roberts, written by Roberts and Ernest Riera, and starring Claire Holt and Mandy Moore. The plot follows two sisters who are invited to cage dive while on holiday in Mexico. When the winch system holding the cage breaks and the cage plummets to the ocean floor with the two girls trapped inside, they must find a way to escape, with their air supplies running low and great white sharks stalking nearby.

The film was released in the United States on 16 June 2017, and in the United Kingdom on 26 July 2017. It received mixed reviews and was a box office success, grossing over $62 million worldwide against a budget of about $5 million.

A sequel, titled 47 Meters Down: Uncaged, was released on August 16, 2019. The two films have grossed over $100 million worldwide.

Sisters Lisa (Mandy Moore) and Kate (Claire Holt) are on vacation in Mexico after Lisa’s boyfriend recently broke up with her. They decide to go watch sharks from a diving cage with two local men. At the docks, Lisa is wary of the boat and its owner, Captain Taylor (Matthew Modine). Kate is a certified diver, but Lisa is new to diving. They lie to Taylor and tell him that Lisa is experienced. Unbeknownst to everyone, the cable supporting the cage is fraying.

Taylor sends Lisa and Kate down, with some sort of futuristic masks by means of which they can talk to him on the surface and to each other. They are soon surrounded by great white sharks; however, the cable breaks, and the cage sinks to the bottom which is 47 meters below the surface and out of communication range with the boat. Kate swims up 7 meters to resume communication with Taylor, who tells her that Javier (Chris J. Johnson) will be coming down with a spare winch cable to attach to the cage. He advises them to stay in the cage because the sharks are close by. Both women are running out of air but soon see a flashlight in the distance. With Kate low on air from the previous swim, Lisa swims out to get Javier’s attention. A shark tries to attack her but she avoids it.

Lisa becomes disoriented about her position; Javier attempts to usher her back towards safety, but he is killed by a great white shark. Lisa takes his spear gun and the winch cable and swims back to the cage. The spare cable is attached but it also snaps and the cage sinks back down, landing on Lisa’s leg and pinning her. Kate tells Taylor they are low on air and Lisa is trapped, he sends air tanks down and tells them the coast guard is an hour out, he also warns that the second tank may cause nitrogen narcosis, which can lead to hallucinations. Kate finds three flares to signal the coast guard. As she returns to the cage, she is attacked and (presumably) devoured by a great white shark. Lisa uses the spear from the spear gun to pull a tank toward her and dons it, getting more air.

Kate is injured and her blood is attracting more sharks. Lisa uses her BCD to lift up the cage, freeing her leg; due to the nature of Kate’s wounds, the sisters decide to swim to the surface, using one of the flares to scare off the sharks, at the 20-meter mark, Taylor reminds them they must wait five minutes to decompress and avoid the bends. Kate accidentally drops the second flare and lights the third, discovering that they are surrounded by sharks.

Taylor yells for them to drop their gear and make a break for the surface, and they swim as fast as they can, one of the sharks bites Lisa’s leg but she escapes, both women make it to the boat but Lisa is attacked again, she sticks her fingers in the shark’s eye and it releases her. The men pull the sisters onto the boat, saving them.

Then it is revealed that Lisa has been hallucinating all this time due to nitrogen narcosis and that she is still at the bottom of the ocean with her leg pinned under the cage. Coast guard divers arrive to rescue her and carry her to the surface whereas her sister has already been killed by the great white shark.

Be the first to review “47 Meters Down Dvd” Cancel reply