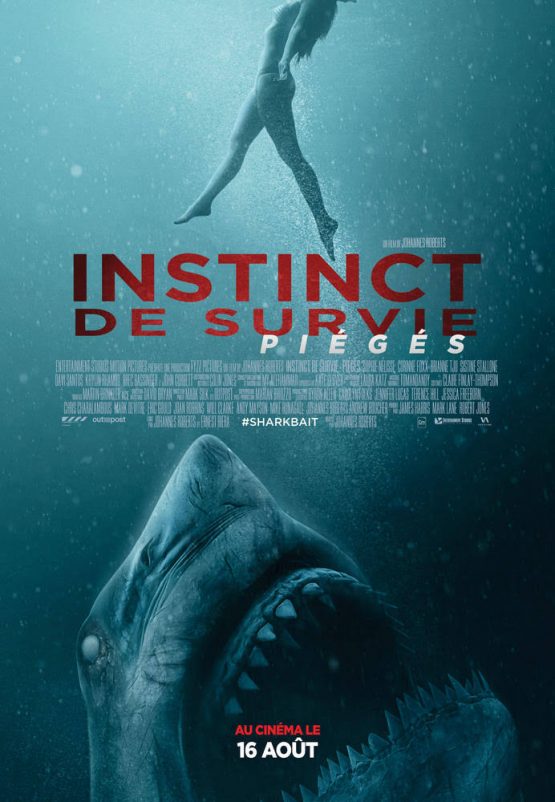 Four teenage divers discover that the sunken ruins of a Mayan city are also a hunting ground for deadly great white sharks. With their air supply steadily dwindling, the frightened girls must navigate the underwater labyrinth of claustrophobic caves and eerie tunnels in search of a way out of their watery hell.

47 Meters Down: Uncaged is a 2019 American-British survival horror film directed by Johannes Roberts and written by Roberts and Ernest Riera, and a standalone sequel to 47 Meters Down (2017).

None of the cast from the previous film returns here. The new cast consists of Sophie Nélisse, Corinne Foxx, Brianne Tju, Sistine Stallone, Davi Santos, Khylin Rhambo, Brec Bassinger, Nia Long and John Corbett. The plot follows a group of girls who scuba dive to a sunken Mayan city, only to be trapped by a group of sharks that are swimming in it.

47 Meters Down: Uncaged was released in the United States on August 16, by Entertainment Studios. It received mixed reviews from critics, with praise for its acting and suspense, but criticism for its weaker CGI and lack of scares. The film had grossed $46.1 million against a $12 million budget, the two films have grossed over $100 million worldwide.

Teenager Mia (Sophie Nélisse) and stepsister Sasha (Corinne Foxx) have just moved to a new school. Another student, Catherine (Brec Bassinger), pushes Mia into the campus pool with Sasha as a bystander. Mia’s father Grant (John Corbett) learns about the incident and plans a boat ride for the sisters to see the great white sharks, hoping the two will bond. Grant gives Mia a tooth of a great white shark he found and recounts when Mia used to scuba dive with him.

On the day of the boat ride, Mia is shocked to see that Catherine and her friends are also there for the tour. Sasha’s friends Alexa (Brianne Tju) and Nicole (Sistine Stallone) arrive and tempt them both to go to a secret place with them. The girls get in Alexa’s car and have a fun time together at the secret lagoon. Alexa reveals that the lagoon has an entrance to a submerged Mayan city where Grant and his two assistants—Carl (Khylin Rhambo) and Alexa’s boyfriend Ben (Davi Santos)—are working to prepare for a visit from a group of archaeologists the following week. After finding scuba gear, Nicole persuades the girls to dive through the city, eventually reaching an ancient sacrificial chamber. They encounter a cavefish, and Nicole accidentally knocks over a stone column, causing a chain reaction of collapses.

The girls become separated by the silt until Mia and Alexa find Ben, who is suddenly devoured by a great white shark and drops the guideline. The girls find each other and are chased by a shark into a tunnel, causing a cave-in to the lagoon’s entrance. The girls decide to go back for the guideline but encounter a shark forcing the girls to swim deeper into the city until they reach an air pocket. Mia hears music in the water and leaves the girls behind in an attempt to get help. Elsewhere, Carl, who is listening to the music, is later attacked and killed by a shark. Mia eventually finds his body, and Grant saves her. The two reunite with the other girls, who came looking for her. They realize the shark is blind, having evolved within the caves, and they are able to distract the shark with sounds and make their escape. The group surfaces at a clearing where a pulley system ascender is set in place. However, two sharks come to the surface, and Nicole panics. She attempts to climb up the rope as Alexa is going up, inadvertently causing the rope, and both of them to fall back into the water, where Nicole is eaten by the sharks.

Grant explains that the only way out is to swim back down even deeper in order to find another exit, which will let them come out in the ocean, but is killed by a shark moments later. Mia, Sasha, and Alexa swim into the caves alone, eventually coming upon a strong current that catches Sasha and separates her from the others. Alexa makes it to the other entrance but is attacked by one of the sharks, and Mia is dragged into the current. Alexa escapes by taking off her air tank but gradually drowns. Mia reunites with Sasha at the lower current, and they swim into a newly discovered cave. At the end of the cave, they find a crevice that leads to the surface, but a shark appears and attacks them. Climbing up the narrow crevice, both girls alternatively get caught in the tight space and must abandon their now empty air tanks to escape.

At the surface, they see a tour boat and start swimming towards it until they realize it is chumming the water to attract sharks. Mia and Sasha get the tourists’ attention as they are attacked by the sharks. While Mia makes it onto the boat, Sasha is grabbed by a shark. Mia jumps back into the water and shoots the shark with a flare gun, freeing Sasha. Sasha reaches the boat, but Mia is grabbed into the water by another shark. She escapes by stabbing the shark’s eye with the tooth given to her by Grant. Mia swims to the boat and reunites with Sasha as a shocked Catherine watches the boat’s staff tend to their wounds.

Be the first to review “47 Meters Down: Uncaged Dvd” Cancel reply