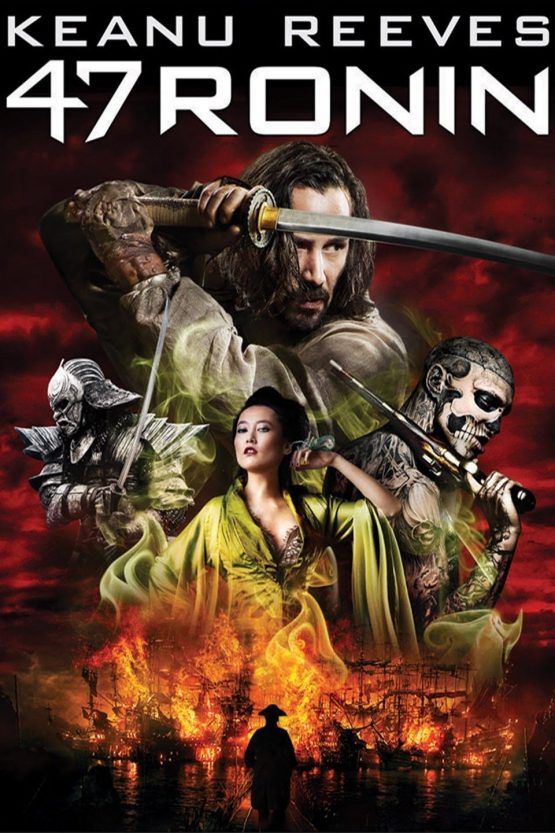 Lord Asano is punished for injuring Lord Kira and asked to commit seppuku. When Kai and the other samurai realise that their master was not at fault, they set out to seek revenge against Lord Kira.

47 Ronin is a 2013 American fantasy action film directed by Carl Rinsch in his directorial debut. Written by Chris Morgan and Hossein Amini from a story conceived by Morgan and Walter Hamada, the film is a work of Chūshingura (“The Treasury of Loyal Retainers”), serving as a fictionalized account of the forty-seven rōnin, a real-life group of masterless samurai under daimyō Asano Naganori in 18th-century Japan who avenged Naganori’s death by confronting his rival Kira Yoshinaka. Starring Keanu Reeves and Hiroyuki Sanada, the film has almost nothing in common with the original historical epic, instead being set “in a world of witches and giants.

In late medieval Japan, Kai is a half-Japanese, half-English outcast who lives in the Akō Domain, which is ruled by the benevolent Lord Asano Naganori. When Kai was young, Asano adopted him as a foundling. Asano’s daughter Mika and Kai eventually fall in love, despite Kai being scorned by her father’s samurai due to his mixed ancestry.

Before a planned visit from Shōgun Tokugawa Tsunayoshi, Asano is visited by the Shōgun’s master of ceremonies, Lord Kira, who wants to take Akō for himself. Kira enlists the help of a shapeshifting kitsune, Mizuki, who sends a kirin to kill Asano in the forest of Ako during a hunting trip. Asano’s samurai struggle in their battle with the monster, so Kai joins in riding an abandoned horse. As the monster charges him, Kai recovers a lost sword that he uses to slay it. He spots Mizuki watching the battle, disguised in her white fox form with different colored eyes. Later during the Shōgun’s visit, Kai notices a concubine with the same multi-colored eyes. He tries to warn Asano’s principal counselor, Oishi, that a witch is present among Kira’s household, but Oishi dismisses his warning.

Later, Kira arranges a duel for the entertainment of the Shōgun: Kira’s best warrior, a golem, will battle a warrior of Asano’s choosing. However, before the duel begins, Mizuki uses her magic to incapacitate Asano’s combatant. Kai secretly dons his armor and fights in his stead, but his disguise is revealed and the Shōgun orders him severely beaten as punishment. Later that night, Mizuki casts a spell to make Asano believe that Kira is raping Mika, causing him to attack the unarmed lord in his delirium. Asano is sentenced to death for attempting to murder an official of the Shōgun, and is compelled to perform seppuku to preserve his honor. The Shōgun then gives Kira both the Akō domain and Mika, although he grants Mika one year to mourn the death of her father before marrying Kira. The Shōgun also brands Oishi and his men ronin and forbids them from seeking vengeance for Asano’s death. Kira has Oishi imprisoned in an outdoor pit, intending to break his spirit as he fears Oishi will seek retribution regardless.

Nearly a year later, Oishi is released by his captors as they believe he is now harmless. During his captivity, Oishi deduces that Kira is guilty of treachery for using sorcery to frame Asano. Oishi reunites with his family and asks his son Chikara to aid him in reuniting the scattered ronin. They learn that Kai has been sold into slavery and Oishi rescues him from the fighting pits of the Dutch colony of Dejima. Kai leads them to the Tengu Forest, a mystical place he escaped from as a child, so that they can obtain the special blades of the Tengu. Kai instructs Oishi to never draw his sword while inside the Tengu temple and continues alone to another room to face the Tengu Master, who once trained Kai in their fighting ways. While Kai confronts the Tengu Master in a battle of wills, Oishi watches an illusion of his men being slaughtered by the Tengu, during which he successfully fights the urge to draw his sword. With Kai and Oishi having proven themselves worthy, the ronin receive their blades.

The ronin plan to ambush Kira on his pilgrimage to a shrine where he seeks blessings for his wedding to Mika. However, the procession turns out to be a trap and the ronin are ambushed by Kira’s retainers, led by Mizuki and her samurai guardian. Several of the ronin are killed, and Mizuki, thinking they are all dead, takes Oishi’s sword and presents it to Kira as a trophy. Mizuki later taunts Mika with their deaths and attempts to manipulate her into committing suicide from despair.

Oishi and Kai (having actually survived the attack) rally the surviving ronin. They lead half of the ronin to infiltrate Kira’s castle by disguising themselves as a band of traveling wedding performers. With Kira’s men distracted during the performance, the remaining ronin scale the castle walls, and launch a coordinated attack against the castle guards. While Oishi fights Kira, Kai and Mika are attacked by Mizuki, who shape-shifts into a dragon. Kai uses his sword and draws on the mystical powers of the Tengu to finally kill her. After gutting him, Oishi emerges with Kira’s severed head and Kira’s surviving retainers surrender.

After winning the battle, the ronin (including Kai) surrender themselves to the authorities of the bakufu and are sentenced to death as they explicitly violated the Shōgun’s prohibition on avenging Asano. However, the Shōgun finds that they followed the principles of bushido in their actions and restores their honor as samurai. Thus, instead of execution, the ronin are allowed to perform seppuku. They are also given the honor of burial with their master, Lord Asano. The Shōgun gives Akō back to Mika, and at the seppuku ceremony, he pardons Chikara so that he may serve Akō and preserve Oishi’s bloodline for the country.

A closing caption informs the audience of the tradition of paying respect at the graves of the 47 Ronin which continues every year on December 14.

Be the first to review “47 Ronin Dvd” Cancel reply