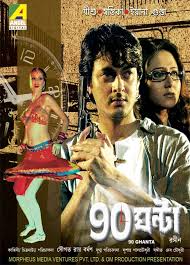 George is in a dilemma when he is hired by Rishin to murder someone. However, he soon realises that his client suffers from schizophrenia and wants to kill himself.

90 Ghanta (“90 Hours”) is a 2008 Bengali psycho-thriller film directed by Sougata Roy Burman. The film was produced by Morpheus Media Ventures.

This film has a strikingly different storyline. It tells the tale of George (Tota Roy Choudhury), Rishin (Jisshu Sengupta) and his wife Mayuri (Swastika Mukherjee). When George takes up a contract killing assignment from Rishin, he doesn’t know his target and client are the same person. Rishin is a schizophrenic who wants himself dead. On realising this, George is torn between his professional ethics and a genuine concern for a fellow human being. Things get complicated when George comes to know Rishin’s wife Mayuri is his ex-girlfriend. Mayuri tries to convince him against killing her husband. Meanwhile, George and Rishin have also bonded over a common passion, music. The film explores the dynamics of this complex scenario.

Be the first to review “90 Ghanta Dvd” Cancel reply