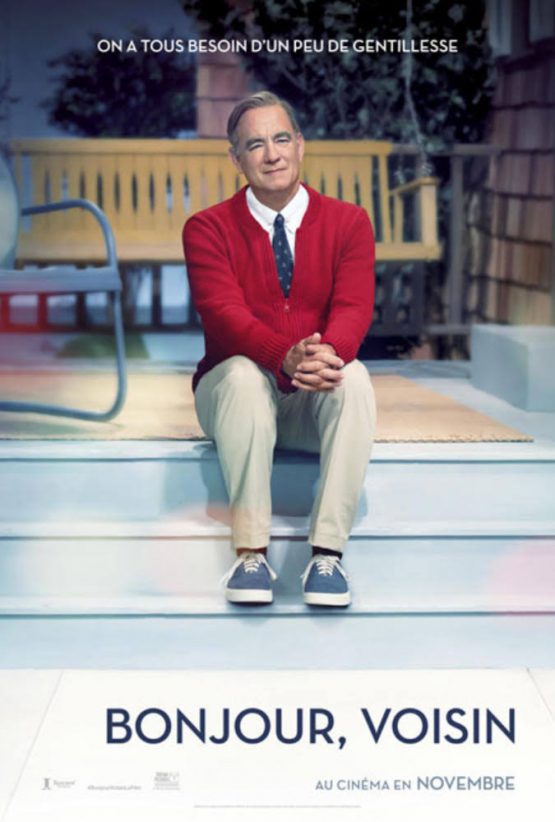 A Beautiful Day in the Neighborhood Dvd

Lloyd Vogel, a cynical journalist, gets acquainted with a kind-hearted television presenter, Fred Rogers, while writing an article on him. With time, the two strike an unlikely friendship.

A Beautiful Day in the Neighborhood is a 2019 American biographical drama film directed by Marielle Heller and written by Micah Fitzerman-Blue and Noah Harpster, inspired by the 1998 article “Can You Say … Hero?” by Tom Junod, published in Esquire. The film stars Tom Hanks, Matthew Rhys, Susan Kelechi Watson, and Chris Cooper. It depicts Lloyd Vogel (Rhys), a troubled journalist for Esquire who is assigned to profile television icon Fred Rogers (Hanks).

The film had its world premiere at the Toronto International Film Festival on September 7, 2019, and was theatrically released in the United States on November 22, 2019, by Sony Pictures Releasing. It received praise from critics for Hanks’ and Rhys’ performances, Heller’s direction, and the heart-warming messages, and grossed $67 million worldwide. A Beautiful Day in the Neighborhood was chosen by Time magazine as one of the ten best films of the year.[4] For his performance, Hanks was nominated for Best Supporting Actor at the Academy Awards, as well as the Golden Globes, Critics’ Choice, Screen Actors Guild Awards, and BAFTA Awards, among others.

Plot
The film follows a loose framing device of an episode of Mister Rogers’ Neighborhood, beginning with Mister Rogers singing “Won’t You Be My Neighbor?” before showing off a picture board with the portraits of some of his friends. He then introduces the viewer to “a new friend,” Lloyd Vogel, who he explains is having a hard time forgiving the person who hurt him, and asks the viewer to think about forgiveness.

In 1998, Lloyd Vogel is an Esquire journalist known for his cynical writing style. He attends his sister Lorraine’s wedding, along with his wife, Andrea, and their newborn son, Gavin. During the reception, Lloyd’s estranged father, Jerry, wants to discuss Lloyd’s dead mother Lila. Jerry says there are two sides to every story, but Lloyd won’t hear him and punches him in the face, starting a fight when others try to restrain him.

Lloyd’s editor assigns him to interview children’s television presenter Fred Rogers for a 400-word article about heroes, but Lloyd feels the assignment is beneath him. He travels to the WQED studio in Pittsburgh to interview Rogers. He sees Rogers on set with a disabled child and then views filming of the program. Afterwards, Rogers is dismissive of his fame and displays concern for Lloyd’s nose injury. Lloyd relates to Rogers the issue of his relationship with his father, and the fight. After their interview, Lloyd watches the filming of a Neighborhood of Make-Believe sequence where Daniel Stripèd Tiger is mad and does not know how to deal with his feelings, and sings “What Do You Do with the Mad that You Feel?” with Lady Aberlin.

Determined to expose Rogers’ friendly persona as an act, Lloyd watches several episodes of Rogers’ show and various interviews but is unable to discern anything. Lloyd interviews Rogers again when he visits New York. During the interview, Rogers dodges Lloyd’s questions and reminisces about raising his two sons. He states that if the things viewers tell him may be a burden he deals with this in many ways. When they mention anger, Fred says a person might swim or even bang the low keys on a piano. Fred then takes out his puppets and asks Lloyd about his childhood “friends” meaning toys. Lloyd says he had Old Rabbit. But when Fred presses him on his parents and the rabbit Lloyd becomes frustrated and ends the interview.

Lloyd arrives home to find Jerry and his girlfriend Dorothy there talking with Andrea. Lloyd berates Jerry for cheating on his mother Lila, while she was dying of cancer. He orders him to leave, but Jerry suffers a heart attack and is transported to the hospital. Lloyd refuses to remain overnight at the hospital with the rest of the family and returns to Pittsburgh to see Rogers.

Exhausted, Lloyd collapses on the set of the Neighborhood of Make-Believe and dreams about his repressed childhood trauma. In his dream, he stumbles into an episode of Rogers’ show about hospitals, finding himself wearing rabbit ears and shrunken to the size of Daniel Striped Tiger and King Friday XIII, while Rogers and Andrea (as Lady Aberlin) tower over him. Lloyd also dreams about Lila, who urges him to release his anger.

Rogers and his wife, Joanne, bring Lloyd to their home to recuperate. Lloyd and Rogers later go to a restaurant, where Rogers asks Lloyd to spend one minute thinking about the people who “loved him into being,” and encourages him to forgive Jerry. Lloyd apologizes to Andrea for leaving her and Gavin at the hospital and visits Jerry and Dorothy at their home. He learns that Jerry is dying of cardiac stenosis, which was the reason Jerry attempted to reconnect with Lloyd. Lloyd forgives Jerry, promises to be a better father to Gavin, and writes an article about Rogers’ impact on his life. The 10,000-word article, “Can You Say … Hero?” is published as Esquire’s cover story. Lorraine, her husband Todd, and Rogers visit Jerry. Rogers asks Jerry to pray for him before he departs. Jerry dies shortly after Rogers’ visit.

The film transitions back into the episode about Lloyd that Rogers appears to be telling. He says goodbye to the viewer before exiting his home. A director yells cut, and production wraps for the day at the studio. While various crew members exit the studio, Rogers plays the piano. Once alone he smashes the keys in frustration, before playing normally, signaling the end of another beautiful day.

Matthew Rhys as Lloyd Vogel:
A jaded journalist who is assigned to profile Rogers for the magazine Esquire. Lloyd is based loosely on journalist Tom Junod, whose encounter with Rogers was adapted into the film. Heller described Lloyd as the viewer’s “entry point into Fred’s teachings” and expressed hope that Lloyd’s character development and growth as a new father would compel viewers to reflect upon themselves.
Tom Hanks as Fred Rogers:
The creator and host of Mister Rogers’ Neighborhood. To prepare for his role, Hanks visited the Fred Rogers Center at Saint Vincent College in Latrobe, Pennsylvania, for research in the Fred Rogers Archives and also watched Won’t You Be My Neighbor?, a 2018 documentary film. At the 2019 Toronto International Film Festival, Hanks recalled watching “hundreds of hours” of footage of Rogers on set and behind the scenes in order to get into character. Director Marielle Heller noted that Rogers “doesn’t have the dynamic nature you need for a protagonist for a movie” and considered him “the antagonist […] who comes into someone’s life and flips it upside down through his philosophy and the way he lived his life”.
Susan Kelechi Watson as Andrea Vogel:
A public attorney, Lloyd’s wife, and a fan of Rogers’ show. Watson, herself a fan of Mister Rogers’ Neighborhood, described her character as a “career woman” who faces unique challenges of patience and adaptation as the mother of a newborn.
Chris Cooper as Jerry Vogel:
Lloyd’s estranged father and a philanderer who cheated on his wife Lila and abandoned Lloyd and Lorraine when they were children. In a press interview for the film, Cooper described his character as “multidimensional” and compared filming a scene with Hanks to seeing the “eyes of God”.
Maryann Plunkett as Joanne Rogers:
Fred’s wife. Plunkett met with Joanne Rogers to prepare for the role.
Enrico Colantoni as Bill Isler:
The President & CEO of Family Communications. In a radio interview, Colantoni said he became friends with the real Bill Isler while filming and described his character as having been “so important to Fred”.
Wendy Makkena as Dorothy Vogel:
Jerry’s second wife. Makkena described her character as part of Vogel’s “dysfunctional, complicated family”.
Tammy Blanchard as Lorraine Vogel: Lloyd’s sister and Todd’s wife.
Noah Harpster as Todd: Lorraine’s husband and Lloyd’s brother-in-law.
Christine Lahti as Ellen: Lloyd’s editor.
Additional cast members include Carmen Cusack as Margy, a producer of Mister Rogers’ Neighborhood; Jessica Hecht as Lila Vogel, Lloyd’s mother and Jerry’s ex-wife; Maddie Corman as Betty Aberlin, an actress starring as Lady Aberlin on Mister Rogers’ Neighborhood; Daniel Krell as David Newell, an actor starring as Mr. McFeely; and Jordan, Naomi, and Zoey Harsh as Gavin Vogel, Lloyd’s son.

Notable cameos in the film include Rogers’ wife Joanne, Mr. McFeely actor David Newell, Family Communications head Bill Isler, and Mister Rogers’ Neighborhood producer Margy Whitmer who appear as customers in a restaurant that Rogers and Lloyd meet in. Arsenio Hall and Oprah Winfrey make uncredited appearances in archive footage of talk shows that Lloyd watches in the film, and Fred Rogers appears in archive footage of his show during the ending credits, singing the song “You’ve Got to Do It”.