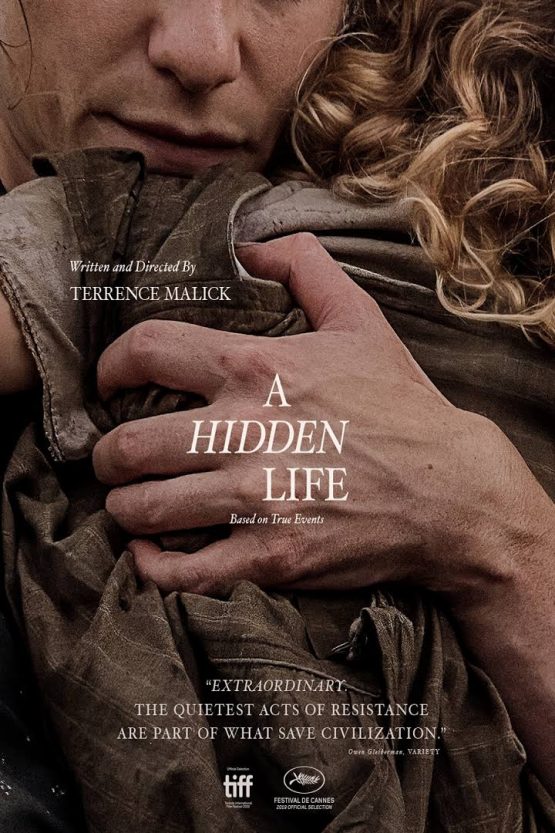 Austrian farmer Franz Jägerstätter faces the threat of execution for refusing to fight for the Nazis during World War II.

A Hidden Life (formerly titled Radegund) is a 2019 German-American epic historical drama film written and directed by Terrence Malick, starring August Diehl, Valerie Pachner, and Matthias Schoenaerts with both Michael Nyqvist and Bruno Ganz in their final performances. The film depicts the life of Franz Jägerstätter, an Austrian farmer and devout Catholic who refused to fight for the Nazis in World War II. The film’s title was taken from George Eliot’s book Middlemarch.

The film had its world premiere at the Cannes Film Festival in May 2019 and was theatrically released in the United States on December 13, 2019. It was the final feature film to be released under the Fox Searchlight Pictures name before Walt Disney Studios changed the company’s name to Searchlight Pictures on January 17, 2020.

Austria, 1939. Peasant farmer Franz Jägerstätter (August Diehl), born and brought up in the small village of St. Radegund, is working his land when war breaks out. Married to Franziska (Fani) (Valerie Pachner), the couple are important members of the tight-knit rural community. They live a simple life with the passing years marked by the arrival of the couple’s three girls. Franz is called up for basic training in the German army and is away from his beloved wife and children for months. Eventually, when France surrenders and it seems the war might end soon, he is sent back from training.

With his mother and sister-in-law Resie (Maria Simon), he and his wife farm the land and raise their children amid the mountains and valleys of upper Austria. Many scenes depict cutting and gathering hay, as well as the broad Inn River. As the war goes on, Jägerstätter and the other able-bodied men in the village are called up to fight. Their first requirement is to swear an oath of allegiance to Adolf Hitler and the Third Reich. Despite pressure from the Mayor and his farm neighbors, who increasingly ostracize him and his family, and from the Bishop of Salzburg, Jägerstätter refuses. Wrestling with the knowledge that his decision will mean arrest and even death, Jägerstätter finds strength in Fani’s love and support. Jägerstätter is taken to prison, first in Enns, then in Berlin and waits months for his trial. During his time in prison, he and Fani write letters to one another and give each other strength. Fani and their daughters are victims of growing hostility in the village over her husband’s decision not to fight. Fani is eventually able to visit her husband in Berlin.

After months of brutal incarceration, his case goes to trial. He is found guilty and sentenced to death. Despite many opportunities to sign the oath of allegiance, and the promise of non-combatant work, Jägerstätter continues to stand up for his beliefs and is executed by the Third Reich in August 1943, while his wife and three daughters survive.

Be the first to review “A Hidden Life Dvd” Cancel reply