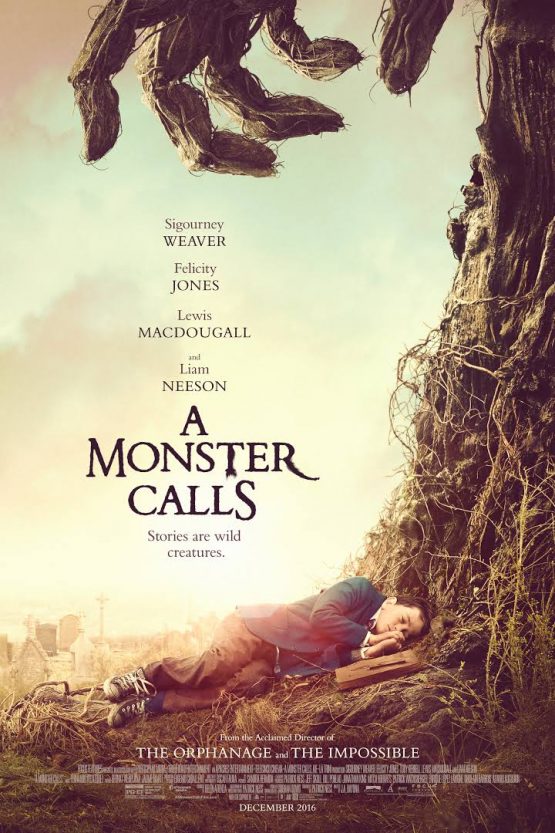 Conor, a twelve-year-old boy, encounters an ancient tree monster who proceeds to help him cope with his mother’s terminal illness and being bullied in school.

A Monster Calls is a 2016 dark fantasy tragedy film directed by J. A. Bayona and written by Patrick Ness, based on his 2011 novel of the same name, which in turn was based on an original idea by Siobhan Dowd. The film stars Sigourney Weaver, Felicity Jones, Toby Kebbell, Lewis MacDougall, and Liam Neeson, and tells the story of Conor (MacDougall), a child whose mother (Jones) is terminally ill; one night, he is visited by a monster in the form of a giant anthropomorphic yew tree (Neeson), who states that he will come back and tell Conor three stories. The film is an international co-production between Spain, United Kingdom and the United States.

13-year-old Conor O’Malley has a close bond with his seriously ill mother, and maintains the household during her regular chemotherapy treatments at the hospital. Conor’s grandmother often visits, and suggests that Conor live with her in the event of his mother’s death. Conor is reluctant to take up this offer due to her cold personality. At school, he is regularly tormented by his classmate Harry. He is also plagued by a nightmare in which the old church near his house collapses into a hole, where someone else is in danger of plummeting and he tries to hold onto them. Conor vents his emotions by drawing, a talent inherited from his mother. One night, exactly seven minutes past midnight, he sees the large yew tree next to the church transform into a gnarled Monster that approaches his home. The Monster says that it will tell Conor three stories during their next meetings, after which Conor must tell the Monster a fourth tale in return.

In the Monster’s first story, a prince escapes from his stepmother, the supposedly-evil elderly queen, but then kills his sleeping bride under a yew tree and makes the queen the scapegoat so that his people can drive her away and make him king. As Conor’s mother worsens, Conor moves in with his grandmother. After he angrily damages her valuable clock, the Monster appears and tells the second story: a hard-hearted parson forbids an apothecary from extracting medicine from an old yew tree, only to rescind this measure when his own children become ill. However, the apothecary cannot help him, and the Monster begins to destroy the parson’s house as punishment. Conor enthusiastically joins in on the destruction, but comes to find that he has decimated his grandmother’s living room instead. His grandmother, while shocked and bitter, does not punish Conor.

The doctors turn to a final treatment involving yew wood. Conor implores the Monster to heal his mother, only for the Monster to dismiss the matter as outside of his responsibility. At school, Harry proclaims that he will no longer bother Conor because he “no longer sees [him]”. The Monster tells a story of an invisible man who did not want to be so. With the Monster’s support, Conor angrily attacks Harry, hospitalizing him. To his astonishment, the headmistress refrains from punishing him as she comprehends his current home situation. When it becomes clear that his mother will die, Conor runs to the yew tree, where the Monster forces him to relive his nightmare, in which his mother dangles for her life. Conor finally tells his own tale, admitting that he had long suspected his mother would not survive and secretly hoped that she would die soon, which fills him with guilt. The Monster tells him that he did not truly want his mother to die, but simply to end his own suffering.

Conor’s grandmother finds him asleep under the yew tree and drives him to the hospital, during which Conor reconciles with her. At the hospital, Conor embraces his mother one last time and as she is passing she glances at the Monster. She dies at seven minutes past midnight. Conor returns to his grandmother’s house, where his mother’s old room is refurbished for him. In the room, he finds his mother’s old art book, which depicts the stories that were told to him by the Monster, and a drawing of his mother as a child with the Monster.

Lewis MacDougall as Conor O’Malley
Max Golds as 5-year-old Conor
Liam Neeson as the “Monster” (voice and motion capture), a giant humanoid yew tree.
Neeson also appears uncredited in a photograph as Connor’s grandfather.
Tom Holland served as the stand-in for the Monster during one week of production.
Sigourney Weaver as Mrs. Clayton (credited as “Grandma”), Conor’s strict grandmother who has a tense relationship with him.
Felicity Jones as Elisabeth “Lizzie” Clayton (credited as “Mom”), Conor’s mother who is diagnosed with an unspecified terminal illness.
Toby Kebbell as Liam O’Malley (credited as “Dad”), Conor’s father who is divorced from Lizzie and now lives in the United States.
James Melville as Harry, a school bully who frequently targets Conor.
Geraldine Chaplin as the head teacher of Conor’s school.

Be the first to review “A Monster Calls Dvd” Cancel reply