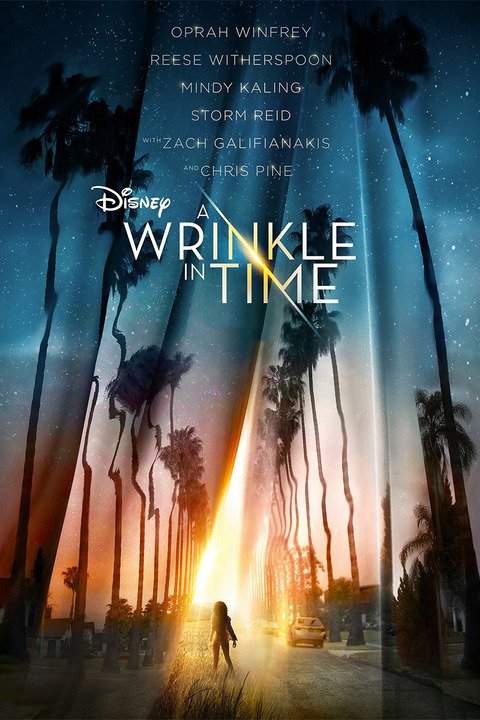 A Wrinkle in Time Dvd

While on a quest to discover a scientific breakthrough, Meg’s father disappears into another realm in space. Three peculiar beings send Meg, her brother, Charles and friend Calvin to find him.

A Wrinkle in Time is a 2018 American science fantasy adventure film directed by Ava DuVernay and written by Jennifer Lee and Jeff Stockwell, based on Madeleine L’Engle’s 1962 novel of the same name. Produced by Walt Disney Pictures and Whitaker Entertainment, the story follows a young girl who, with the help of three astral travelers, sets off on a quest to find her missing father. The film stars Oprah Winfrey, Reese Witherspoon, Mindy Kaling, Levi Miller, Storm Reid, Gugu Mbatha-Raw, Michael Peña, Zach Galifianakis, and Chris Pine.

It is Disney’s second film adaptation of L’Engle’s novel, following a 2003 television film. Development began in 2010, with DuVernay signing on to direct in February 2016. Principal photography began on November 2, 2016 in Los Angeles, California. Near the end of filming, production moved to New Zealand, where photography ended on February 25, 2017. With an estimated production budget of $103 million, the film became the first $100-million-budget live-action film to be directed by a black woman.

With a total production and marketing budget of around $250 million, the film was a box office bomb, with losses of up to $131 million. The film received mixed reviews, with critics taking issue “with the film’s heavy use of CGI and numerous plot holes”, while others “celebrated its message of female empowerment and diversity”.

Thirteen-year-old middle school student Meg Murry struggles to adjust to her school and home life since her father Alex, a renowned scientist, mysteriously disappeared while studying astrophysics when she was very young. Both Meg and her mother Kate believed he had solved the question of humanity’s existence and was teleported to another world.

One evening, Meg’s younger brother Charles Wallace welcomes Mrs. Whatsit, a red-haired stranger in an extravagant white dress, into the Murry family house. Mrs. Whatsit claims that the tesseract, a type of space travel Alex was working on, is real. The next day, while walking their dog, they meet one of Meg’s classmates, Calvin O’Keefe. He joins them to go to the house of Mrs. Who, a friend of Charles who speaks only in quotations.

Meg and Charles invite Calvin to dinner. Afterwards Meg and Calvin go into her backyard where Mrs. Whatsit appears with Mrs. Who and another woman, Mrs. Which. The three reveal themselves as astral travelers and lead Meg, Calvin, and Charles through a tesseract, transporting them to a distant planet named Uriel, third planet from the star Malak in Messier 101.

After learning from the flowers that Alex has been to Uriel and since departed, Mrs. Whatsit transforms into a large flying creature and takes the children into the atmosphere where they see a dark shadow called The IT. After gaining the women’s trust, Meg and the others tesser to another planet called Orion in the ‘belt’ of the namesake constellation to meet with a seer, the Happy Medium, to seek his help to find Alex.

Happy Medium shows them that Meg’s father tessered to Uriel, then Ixchel, and got trapped when he tessered to the planet Camazotz, The IT’s homeworld. After Mrs. Which explains that The IT represents all greed, anger, pride, selfishness, and low self-esteem in the world, she shows the children personal examples of these characteristics, including an elderly friend and neighbor of Charles getting mugged at a bus stop, Meg’s school bully Veronica’s extreme self-consciousness about her weight, and that Calvin, despite being popular at school, is forced and abused by his father to be a perfectionist. Given the news that Alex is in danger on Camazotz, the three Misses insist that they all travel back to Earth to regroup and make a plan, but Meg’s strong will not to leave without her father overrides the tesseract, and she unintentionally redirects them to Camazotz.

Upon arriving on Camazotz, Mrs. Which, Mrs. Whatsit, and Mrs. Who find they are unable to stay because Camazotz’s evil is stronger than their light. Before they depart, they bestow gifts: Mrs. Who gives Meg her glasses which can see what is really there, Mrs. Whatsit gives Meg the knowledge of her faults, and Mrs. Which gives the command to never separate.

After the Misses leave, trees sprout up out of the ground and a forest appears. Meg and Calvin get separated from Charles by the wild forest. They desperately race to get to the wall to prevent a tornado-earthquake storm called the Land Monster that is destroying the forest. Once creatively getting past the wall by using the Land Monster, they reunite with Charles and find themselves in a look-alike neighborhood where all the children are bouncing balls in perfect sync. After calling their children inside, one woman invites them to come inside her house for a meal, but Meg declines the offer and reminds Calvin and Charles not to trust anyone.

The surroundings change again and the three children find themselves on a beach where they meet The IT in its bodyguard form, Red. He offers the starving children food and tells them that Alex is safe and happy. He says there is nothing to worry about, but Calvin and Meg realize something is wrong when Charles says that the food tastes like sand. When Red starts repeating a times table, Charles is hypnotized by the rhythm, enabling The IT to take control of his mind.

Meg and Calvin pursue Red and Charles, forcing their way through the beachgoing crowds. They find themselves trapped in a seemingly empty, white spherical room in “CENTRAL Central Intelligence”. Charles’s personality is different and he insults Meg and Calvin as Red shuts down and disappears. Using Mrs. Who’s glasses, Meg discovers and climbs an invisible staircase to a room where her father is imprisoned. After a tearful reunion, Meg brings Alex out of captivity, but Charles, under the influence of The IT’s power, forcefully drags them to meet his master. As Calvin and Meg fall under The IT’s power, Alex opens another tesser and prepares to escape with the two of them, abandoning Charles. Meg refuses and projects herself out of the tesser. When she confronts Charles, she realizes The IT uses deception and hatred only to fuel its power. Expressing her love for her brother and using the knowledge that she is imperfect, Meg frees Charles as well as lifting the IT’s control over Camazotz. The three Misses reappear and congratulate Meg’s victory. Mrs. Which says that she and Charles became true warriors, and they tesser back home.

After returning home, Meg and Charles are reunited with their parents and they assure each other that they love each other. Calvin leaves Meg to confront his father after saying a few words to Meg. She stares at the sky, thanking the Misses.

Oprah Winfrey as Mrs. Which, an astral being as old as the universe
Reese Witherspoon as Mrs. Whatsit, an astral being whose favorite planet is the planet Uriel
Mindy Kaling as Mrs. Who, an astral being from the planet Ixchel
Storm Reid as Meg Murry, a gifted young girl
Lyric Wilson as young Meg
Levi Miller as Calvin O’Keefe, Meg’s classmate and friend
Deric McCabe as Charles Wallace Murry, Meg’s precocious adoptive six-year-old brother
Chris Pine as Dr. Alexander Murry, Meg and Charles Wallace’s long-lost father and Kate’s husband
Gugu Mbatha-Raw as Dr. Kate Murry, Meg and Charles Wallace’s mother and Alex’s wife
Zach Galifianakis as Happy Medium, a seer from the planet Orion.
Michael Peña as Red, a form of The IT
David Oyelowo as The IT, Red’s true diabolical form
Andre Holland as James Jenkins, the principal of Meg, Calvin and Charles Wallace’s school
Rowan Blanchard as Veronica Kiley, a student who bullies Meg and later becomes nice to her
Bellamy Young as Camazotz Woman, a mother from the Camazotz neighborhood
Conrad Roberts as Elegant Man, an elder neighbour and friend of Charles Wallace.
Yvette Cason as Teacher, a gossipy, jealous teacher
Will McCormack as Teacher, another gossipy, jealous teacher
Daniel MacPherson as Mr. O’Keefe, Calvin’s abusive father