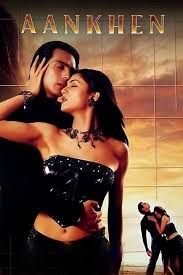 Vijay Singh Rajput sets out to seek revenge against the bank responsible for letting him go from his job. He plans an elaborate heist with the help of three men who are blind and trains them.

Obsessive and temperamental bank manager Vijay Singh Rajput (Amitabh Bachchan) loses his job for badly beating up a bank clerk who tried to embezzle money. Angered at losing his job he plots revenge on the bank by intending to stage a heist. He employs three blind men – Vishwas (Akshay Kumar), a blind person who has the power of the sixth sense, Elias (Paresh Rawal) and Arjun (Arjun Rampal) — when, after passing by school for the blind, he understands that blind people can be trained to do things like sighted people. He blackmails and enlists the help of Neha (Sushmita Sen) who is a teacher at the school to train the trio to do the seemingly impossible heist. He chose blind people because they, as thieves, would never be suspected as no one would believe blind people can rob a bank.

The bank robbery is successful, with the jewels safely captured by the three. However, in the process of robbing the bank, Elias’s face is exposed, captured in footage and prompting citywide posters with his face. Meanwhile, Mr. Rajput anxiously tries to extort information from Vishwas and Arjun regarding the jewels and their location. Unable to answer, as they did not collect the items, they try to defer the answer by changing subjects. Ultimately, it is revealed that Elias is the one with complete knowledge of the box’s belongings. Meanwhile, tensions rise between Rajput and Neha; the latter resists the abusive nature of Rajput and his obnoxious harassing of Vishwas and Arjun. Arjun confesses his love to Neha, who reveals that she is associated in the plot only for the well-being of her younger brother, Rahul, who has been kidnapped by Rajput.

In a furious attempt, the police try to locate Elias. Elias lands up at Rajput’s place after getting drunk. Rajput tries several ways to force Elias into revealing the location of the box. Unable to generate an answer, he slams Elias, who falls on the ground and injures his eyes, causing bleeding. Even in this scenario, Rajput tries to get the information, but Vishwas and Arjun resist and claim that they will reveal the location if Elias is treated by paramedics. Rajput sends them to get Dr. Siddiqui. Vishwas senses that Elias is in danger and Arjun and Vishwas double back to the training center to save him. Rajput starts to harass Elias by tickling him to force him to reveal the answer. In the action, Elias falls off the balcony and dies. Unable to bear the shock of the death, Neha pulls a gun on Rajput and threatens to reveal everything to the police if he does not leave her and the other two alone. Rajput notifies Neha that all these acts were done under her training, and he is spotless. Unable to bear this fact, Neha shoots herself, just as Vishwas and Arjun return after hearing loud screams.

Both men gang up on Rajput and try to attack him. Once Rajput realises that the men are ignorant about the jewels, he starts shooting them. The police arrive, and confusion ensues. Vishwas and Arjun come out and claim that Rajput is abusing them while he claims that there is a big conspiracy involving the two men, Neha and Elias. Unable to believe that blind men can ransack a bank and amidst Rajput’s impassioned defence, the police start getting suspicious. In the heat of defending himself, Rajput reveals that he had sent over Elias, thus confessing his crime.

In the end, Rajput has been locked away. Vishwas and Arjun decide to take care of Rahul and ultimately find the jewels – they were hidden in Elias’ musical instrument.

Be the first to review “Aankhen Dvd” Cancel reply