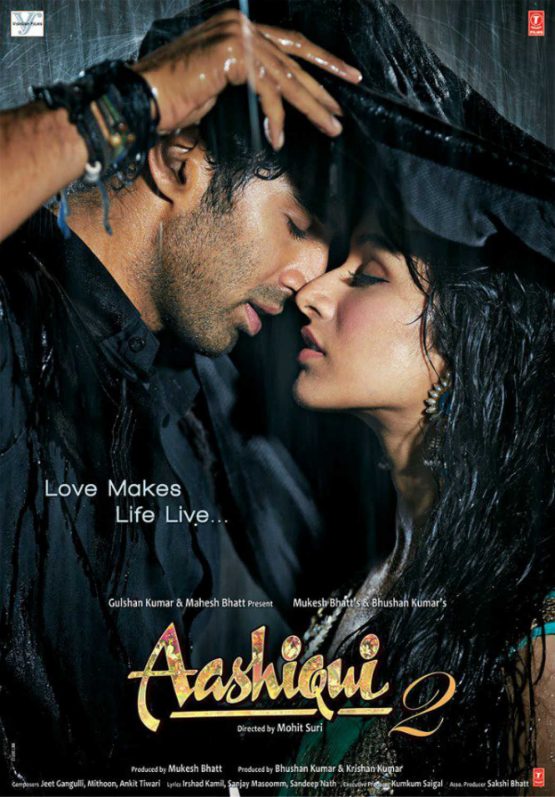 Rahul, a singing sensation, falls in love with Aarohi, a woman who sings in a bar. He helps her accomplish her dream of becoming a famous singer but his own shortcomings jeopardise their future.

Aashiqui 2 (transl. Romance 2) is a 2013 Indian romantic musical drama film directed by Mohit Suri. Starring Aditya Roy Kapur and Shraddha Kapoor in the lead roles, it was produced by Mukesh Bhatt and Bhushan Kumar under the Vishesh Films and T-Series banners. An adaptation of the 1954 romance A Star Is Born, it serves as a spiritual successor to the 1990 musical film Aashiqui, and stars Shaad Randhawa and Mahesh Thakur in supporting roles, as well as Salil Acharya in a cameo appearance in the beginning of the film.

Set in the early 2010s, Aashiqui 2 centers on a turbulent romantic relationship between a failing singer, Rahul Jaykar, and his protege, aspiring singer Arohi Keshav Shirke, which is affected by Rahul’s issues with alcohol abuse and temperament. There were initially several concerns in the Indian media that it could not live up to the high standards and success of the original. Production of the film began in 2011, with the principal photography taking place in Cape Town, Goa and Mumbai on a budget of ₹180 million (US$2.5 million).

Premiered on 26 April 2013, Aashiqui 2 became a commercial success at the box-office despite featuring newcomers, and was one of the highest-grossing Bollywood films of 2013, earning ₹1.45 billion (US$20 million) worldwide within the first four weeks. Aashiqui 2 is the highest-grossing film ever produced by Vishesh Films. The soundtrack to the film became very popular after its release; the songs “Tum Hi Ho” and “Sunn Raha Hai” topped the charts across various platforms in India, as did the songs “Chahun Main Ya Naa” and “Milne Hai Mujhse Aayi”.

The film opens by showing a large crowd waiting for Rahul Jaykar – a successful singer and musician whose career is waning because of his alcohol addiction – to perform at a stage show in Goa. After nearly completing a song, he is unexpectedly interrupted by an artist, Aryan, who was losing his career due to Rahul’s, during his performance. Rahul fights him, stops his performance, and drives to a local bar. He meets Aarohi Keshav Shirke, a bar singer who idolises Rahul. After noticing Aarohi looking at a photograph of Lata Mangeshkar in the bar, he assumes that she wants to become a singer. Impressed by her simplicity and voice, Rahul promises to transform her into a singing sensation and asks her to never perform again in bars. Due to his assurance, Aarohi leaves her job and returns to Mumbai with Rahul, who convinces record producer Saigal to meet her. When Aarohi calls Rahul, he is attacked and injured by some thugs, and is unable to receive her call. His friend and manager Vivek decides that news of the assault on Rahul should not be leaked to the media, and instead publicises a false story that Rahul has left the country to participate in stage shows. When Aarohi attempts to contact Rahul again, Vivek ignores the calls. After two months of futilely attempting to contact Rahul, a broken Aarohi is forced to sing in bars again because of her family problems.

Meanwhile, Rahul recovers from his injuries and again starts the search for Aarohi. He learns that Aarohi is working in a bar again and that Vivek had ignored her calls without informing him. Rahul apologises to Aarohi and fires Vivek, and they meet with Saigal for the recording agreement. Rahul begins to train Aarohi, who signs a music contract to sing in films and becomes a successful playback singer. Her family and Rahul are happy, but when people begin to gossip that Rahul is using her as a servant, he relapses into alcohol addiction. Aarohi, who loves Rahul more than her career, comforts him and they end up making love. Despite Aarohi’s mother’s disapproval, Aarohi moves in with Rahul and things go well until Rahul’s addiction worsens, causing him to become aggressive and violent.

To help Rahul fight his alcoholism, Aarohi attempts to rehabilitate Rahul, sacrificing her singing career in doing so. After Saigal reminds them about their dream of Aarohi becoming a successful singer, Rahul orders her to focus on her work. During Aarohi’s stage show, Rahul meets a journalist backstage, who accuses him of using Aarohi for pleasure and money. Furious, Rahul beats up the journalist and starts drinking. He ends up in jail, and Aarohi comes to bail him out. Rahul overhears Aarohi telling Saigal that she is going to leave her career for him and is ready to give up her celebrity status because Rahul is more important to her. Rahul understands that he has become a burden in her life, and that leaving her is his only option to save her. The next day, he bids her farewell by assuring her that he will change his lifestyle and commits suicide by jumping from a bridge.

Distraught by Rahul’s death, Aarohi decides to leave her career but Vivek persuades her to stay. He reminds her that Rahul wanted her to become a successful singer and killed himself as he did not want to be a burden on her and remain an obstacle in the path of her success. Aarohi agrees, and returns to singing. Later, she signs her name as “Aarohi Rahul Jaykar” in a fan’s handbook as a tribute to Rahul and her unfulfilled desire to marry him. As rain starts falling, she watches the couple who took her autograph sharing a romantic moment under a jacket as she and Rahul had done.

Be the first to review “Aashiqui 2 Dvd” Cancel reply