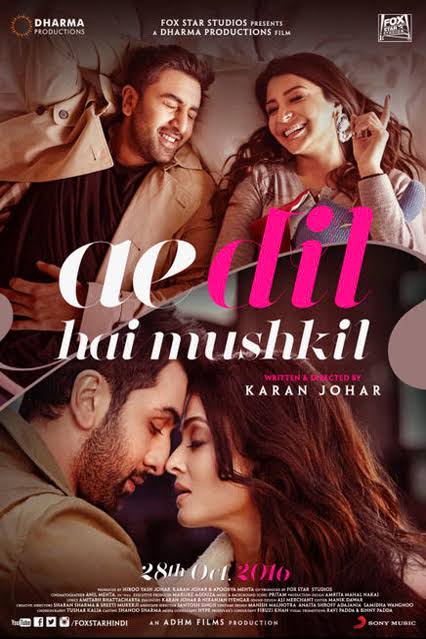 Alizeh, an independent woman recovering from a breakup, and Ayan, a naive musician, meet in New York and form an incredible bond. From there, they experience love, heartbreak and the facts of life.

The film’s soundtrack won four Filmfare Awards in January 2017. It went on to gross ₹2.23 billion (US$31 million) worldwide, becoming a commercial success.The film was declared a super-hit at the box office.

The film begins with the interview of Ayan Sanger (Ranbir Kapoor), a singer who has newly acquired fame with his non-filmy songs. He tells the story of his experience of love in a flashback. A few years ago, in London, a chance meeting in a disco between Ayan, the son of a millionaire, a novice in terms of sex-related matters, and Alizeh Khan (Anushka Sharma), who knows about sex a little more, ends up with them trying to make out, and it turning into a comedy. They get to know about each other and become friends. Later, when they discover their respective partners are cheating on them, they break up with their lovers: Ayan with Lisa D’Souza and Alizeh with “Dr.” Faisal Khan and the two go to Paris to spend a week together. While Ayan falls in love with Alizeh but does not tell her while she considers him to be only a “friend”. One day, Alizeh stumbles upon DJ Ali, her ex-boyfriend/lover, who wants to reconcile. Partially confused, but still in love with him, Alizeh decides to go with DJ Ali, and so unintentionally stops hanging out with Ayan and they cease communication.

A few days later, Alizeh calls and invites Ayan to her wedding with DJ Ali Khan (Fawad Khan) in Lucknow. Ayan is shaken on hearing this but agrees to the invitation. At the wedding, he tells Alizeh he loves her but she rejects his feelings causing Ayan to leave the ceremony heartbroken. At the airport to board a flight to Dubai, he meets Saba Taliyar Khan (Aishwarya Rai Bachchan), a poet, who is leaving for Vienna. She consoles Ayan and gives him a book with her poetry and number on it. Ayan calls after three months stating that he is in Vienna and wants to meet her. He learns that Saba is divorced and has no place for love in her heart. Later, he also meets Saba’s ex-husband, Tahir Taliyar Khan (Shah Rukh Khan) in a fine arts gallery, who tells him that one-sided love is not a weakness but empowering. Ayan, who had blocked Alizeh from contacting him in all ways, finally calls and reconnects with her. He begins to send pictures of Saba to her to try and induce jealousy.

One day Alizeh informs Ayan that she’s coming to Vienna and wants to meet him. Ayan invites her for dinner with Saba to provoke Alizeh into loving him, but Alizeh thinks Ayan has found love in Saba and is happy for him. Meanwhile, Saba begins to develop feelings for Ayan, but he loves Alizeh. Seeing his love for Alizeh, Saba asks him to leave.

Ayan continues to harbor love for Alizeh and becomes a famous singer with his channel. He meets Ali one day and realizes that Ali and Alizeh have parted ways. Ayan goes to Alizeh’s favorite spot and waits there until she arrives. Alizeh tells Ayan that she is diagnosed with cancer stage IV and will not live much longer. Ayan and Alizeh try to make the best of their time together. Ayan tries to make Alizeh love him, to no avail. This leads to a fight between the two, and Alizeh decides to leave Ayan. Next morning Ayan tries to search for Alizeh, apparently reaching the airport and thus fulfilling her last wish also before death. Eventually, Ayan makes peace with the fact that he and Alizeh can at least be friends and nothing more. Alizeh dies soon. The screen blacks out and comes back to the present where Ayan, still a popular singer, is giving an interview based on the love of his life. Ayan sings the song “Channa Mereya”, which is inspired by his one-sided love story, and finishes the interview.