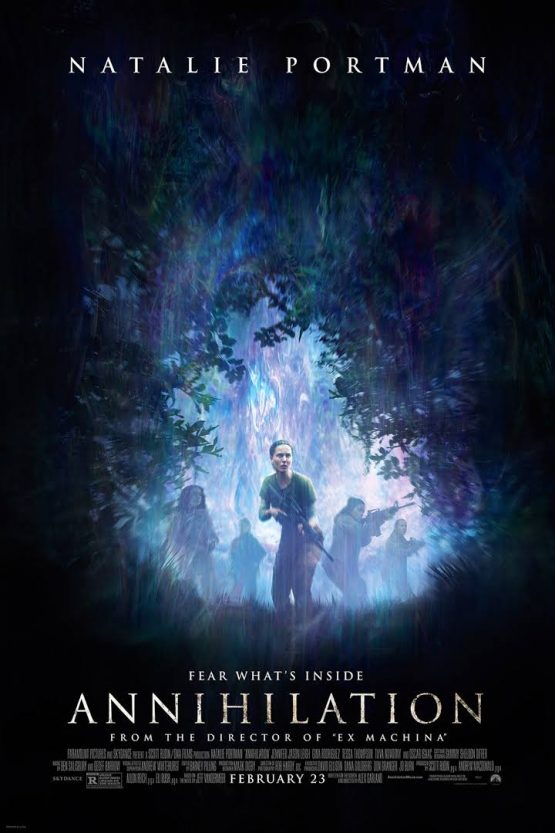 Lena, a biologist and former soldier, joins a mission to uncover what happened to her husband inside Area X — a sinister and mysterious phenomenon that is expanding across the American coastline. Once inside, the expedition discovers a world of mutated landscapes and creatures, as dangerous as it is beautiful, that threatens both their lives and their sanity.

Annihilation is a 2018 science fiction horror film written and directed by Alex Garland, based on the 2014 novel of the same name by Jeff VanderMeer. It stars Natalie Portman, Jennifer Jason Leigh, Gina Rodriguez, Tessa Thompson, Tuva Novotny, and Oscar Isaac. The story follows a group of explorers who enter “The Shimmer”, a mysterious quarantined zone of mutating plants and animals caused by an alien presence.

Annihilation was released theatrically in Canada and the United States by Paramount Pictures on February 23, 2018, and in China on April 13, 2018. Across the three countries, it grossed $43 million against a production budget between $40–55 million, becoming a box office bomb. It was released digitally by Netflix in a number of other countries on March 12, 2018. The film received praise for its visuals, acting, direction, and thought-provoking story. According to Empire Magazine, the film addresses “depression, grief, and the human propensity for self-destruction”.

At a U.S. government’s secret facility Area X, cellular biology professor and former soldier Lena is questioned as the sole survivor of an expedition to an anomalous zone known as “the Shimmer”. Three years prior, the Shimmer emerged from a meteor that landed inside a lighthouse on the southern coast, and is gradually expanding its boundaries. Lena’s husband Kane, a member of Army Special Forces, reappears at their home after a year of absence, unable to explain where he was or how he came back. His condition quickly deteriorates and Lena calls an ambulance, but they are intercepted by security forces and taken to the secret facility. With Kane in intensive care, psychologist Dr Ventress shows Lena the Shimmer, and explains that many exploratory teams have entered, but only Kane has ever returned. Ventress prepares a new scientific expedition into the Shimmer, joined by Lena, physicist Josie Radek, geomorphologist Cassie “Cass” Sheppard, and paramedic Anya Thorensen.

The group enters the Shimmer, and Lena has a vision of her past affair with a colleague. When the group awakens, they find their communication and navigation equipment does not function, and conclude that three to four days have passed, but they do not remember anything after entering the Shimmer. They encounter mutated plants and animals, and Josie is attacked by an albino alligator with rows of shark-like teeth. At an abandoned military base, they find a video message from Kane’s expedition, showing him cut open another soldier’s abdomen to reveal his slithering intestines. The group finds the soldier’s corpse, now an overgrown colony of lichens.

At night, the base is attacked by a mutant bear that drags Cass away, and Lena later finds her mutilated body. Reaching an abandoned village, they discover plants that have taken on human-like forms. Josie theorizes that the Shimmer functions as a prism for DNA, distorting and transforming everything within its boundaries, including the group’s own bodies. Anya, overcome with paranoia after watching her fingerprints change, ties up the others and accuses Lena of murdering Cass. The bear lures Anya away by emitting a cry for help in Cass’s voice, and kills Anya, while Josie frees herself and shoots the bear dead.

Ventress, who has terminal cancer and is determined to confront the Shimmer’s source, leaves alone for the lighthouse. Josie and Lena realise that the Shimmer’s “refractions” are already inside their bodies; Josie believes Cass’s dying mind was “refracted” into the bear, and herself refracts into plant form. Lena, believing that Kane accepted the suicide mission into the Shimmer because she cheated on him, reaches the lighthouse and discovers his remains and a videocamera. In the footage, Kane tells the man filming to find Lena, and commits suicide with an incendiary grenade; the other man is revealed to be a doppelgänger of Kane.

Lena descends into the hole created by the meteor and finds Ventress, who tells her the forces at work will spread to encompass everything. Ventress disintegrates into a glowing nebulous structure that absorbs a drop of blood from Lena’s face, creating a humanoid entity that mimics Lena’s motions. Unable to escape the entity as it mirrors her, Lena hands it a phosphorus grenade, and it transforms into an identical copy of her. Lena activates the grenade and flees from the lighthouse, but the creature does not follow. Set ablaze by the grenade, the creature affectionately touches Kane’s burned body before crawling back into the hole and igniting the core of the lighthouse. Lena watches as the constructs of the Shimmer collapse, and it fades away.

At the facility, Lena’s interviewer reveals that Kane has recovered after the Shimmer vanished. Lena visits him, and asks if he is really Kane; he replies, “I don’t think so”. He asks if she is Lena, and she does not answer. Kane embraces Lena, and their irises shimmer.

Be the first to review “Annihilation Dvd” Cancel reply