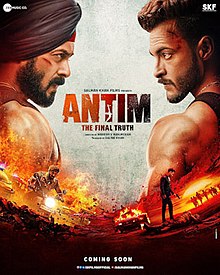 The cop played by Salman fights the land mafia in the film.

Antim: The Final Truth is an upcoming Indian Hindi-language action thriller film directed by Mahesh Manjrekar and produced by Salman Khan Films. Distributed by Zee Studios, it is an adaptation of the Marathi film Mulshi Pattern. The film stars Salman Khan and Aayush Sharma in the main roles with Mahima Makwana and Pragya Jaiswal as the female leads.

The story revolves around the face-off between a Sikh police officer (Khan) and a gangster (Sharma), and like the original, it explores the hard conditions faced by farmers that pushes some of them towards crime. Principal photography begun in November 2020, and concluded in the first week of October 2021. The film’s official trailer was launched on 25 October 2021. It is scheduled to theatrically release worldwide on 26 November 2021.

Be the first to review “Antim: The Final Truth DVD” Cancel reply