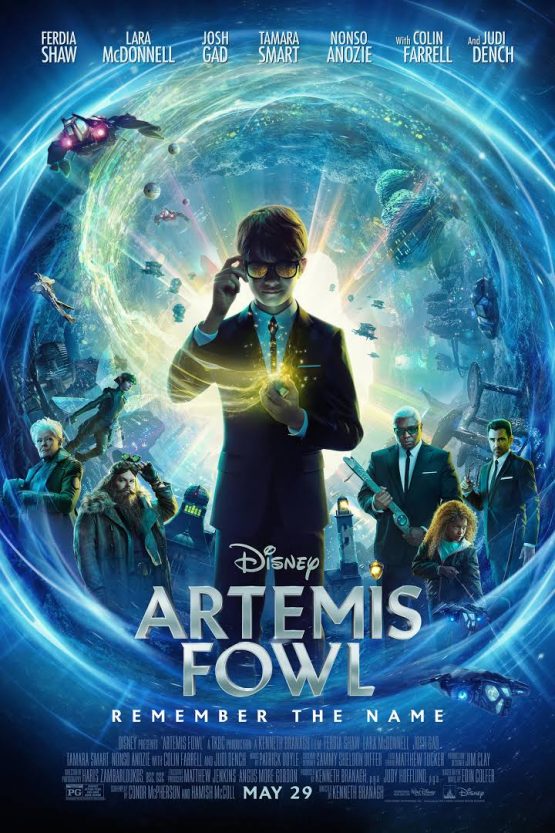 Artemis Fowl is a 12-year-old genius and descendant of a long line of criminal masterminds. He soon finds himself in an epic battle against a race of powerful underground fairies who may be behind his father’s disappearance.

Artemis Fowl (known in certain territories as Artemis Fowl: The Secret World) is a 2020 American science fantasy adventure film based on the 2001 novel of the same name by Irish author Eoin Colfer. It is directed by Kenneth Branagh, from a screenplay co-written by Conor McPherson and Hamish McColl. The film stars Ferdia Shaw, Lara McDonnell, Josh Gad, Tamara Smart, Nonso Anozie, Colin Farrell, and Judi Dench. It details the adventures of Artemis Fowl II, a 12-year-old Irish prodigy who teams up with his faithful servant, as well as a a dwarf and a fairy, in order to rescue his father, Artemis Fowl I, who has been kidnapped by another fairy looking to reclaim an item the Fowl family has stolen.

Originally intended to be launched as a franchise by Miramax in 2001, the film languished in development hell with several writers and directors attached until Walt Disney Pictures acquired the rights in 2013. Branagh was hired in September 2015, and much of the cast joined in 2017. Filming began in March 2018, taking place around Europe.

Artemis Fowl’s intended theatrical release was cancelled in response to the COVID-19 pandemic. Instead, it was released digitally worldwide on Disney+ on June 12, 2020. The film was panned by critics. It is unknown if it will be released on DVD or Blu-ray.

On the coast of Ireland, a media frenzy descends on Fowl Manor, where a stolen collection of world-famous relics is linked to wealthy businessman Artemis Fowl. Arrested at the manor, Mulch Diggums is interrogated by British intelligence and claims that his employer has stolen the powerful “Aculos”. Offering to prove the existence of magic, Diggums tells the story of Artemis Fowl, Jr.

Three days earlier, Artemis, a 12-year-old genius, lives at Fowl Manor with his widowed father Artemis Sr., who passes on his knowledge of Irish fairy tales. Artemis Sr. goes missing from his boat, the Fowl Star, accused of the theft of several priceless artifacts found aboard, and Artemis receives a call from a hooded figure. Holding his father captive, the hooded figure gives Artemis three days to recover the Aculos, which Artemis Sr. has stolen and hidden. Domovoi “Dom” Butler, Artemis’ bodyguard, shows him a hidden library where generations of Fowls have catalogued proof of the existence of magical creatures.

Deep underground in Haven City – home to a secret civilization of fairies – Mulch, revealed to be an oversized dwarf thief, encounters Lower Elements Police reconnaissance (LEPrecon) officer Holly Short as he is taken to prison. Commander Julius Root dispatches the LEPrecon force to search for the missing Aculos, the fairies’ greatest resource. Foaly, LEPrecon’s centaur technical advisor, discovers an unauthorized creature has reached the surface. Holly is sent to investigate, despite the fact that her father, Beechwood Short, stole the Aculos and was killed. In Martina Franca, Italy, Holly intervenes as a rogue troll attacks a human wedding party. Using a “time freeze”, LEPrecon subdues the troll and wipes the humans’ memories.

Dom’s 12-year-old niece Juliet arrives at the manor. From his father’s journal, Artemis learns that Beechwood brought the Aculos to Artemis Sr. to keep it from the hooded figure, who is revealed to be Opal Koboi, a powerful fairy planning to wipe out humankind. Studying his father’s notes, Artemis sends Dom to stakeout the Hill of Tara. Holly, determined to clear her father’s name, disobeys orders and flies to the Hill of Tara, where she finds Beechwood’s ID tag, but is captured by Dom and imprisoned inside the manor.

Root and an army of LEPrecon officers seal Fowl Manor in a time freeze, but Artemis and Dom fight them off using Holly’s equipment. Artemis demands the Aculos in exchange for Holly’s release, and forbids any fairy to enter his home while he is alive. Bound by fairy rules, Root is forced to retrieve Mulch from prison, offering him a reduced sentence to infiltrate Fowl Manor. Mulch tunnels inside and breaks into Artemis Sr.’s hidden safe, finding the Aculos, while Artemis frees Holly and asks for her help. Lieutenant Briar Cudgeon, a spy for Koboi, seizes command of LEPrecon and releases the captured troll into the house, jamming all magic inside.

Mulch swallows the Aculos as Artemis, Holly, Juliet, and Dom evade the rampaging troll, which is subdued when it falls from a chandelier. Pushing Artemis out of the troll’s way, Dom is mortally wounded. Against Cudgeon’s orders, Holly’s fellow officers unblock her magic, and she revives Dom. Mulch and the LEPrecon army escape as the time freeze collapses. Left with the Aculos, which no human can wield, Artemis refuses to give such a powerful weapon to Koboi, and Holly agrees to use it to rescue Artemis’ father. As Koboi attempts to kill Artemis Sr., Holly summons him safely to Fowl Manor.

Reunited with his son, Artemis Sr. tells Holly that her father gave his life to protect the Aculos, giving her a list of Koboi’s accomplices. Holly returns the Aculos to Haven City, where Root, back in command, directs her to investigate every name on the list. Artemis calls Koboi with a promise to come after her, and joins his father and Dom in a helicopter. Mulch’s interrogator offers him freedom in exchange for help capturing Artemis Sr., but Mulch reveals that Artemis arranged his arrest to prove the incident to the authorities, before proceeding to confirm the existence of magic and his own status as a dwarf on camera. As the interrogator calls for backup, the Fowls’ helicopter rescues Mulch and, joined by Holly, they fly off to their next mission.

Be the first to review “Artemis Fowl Dvd” Cancel reply