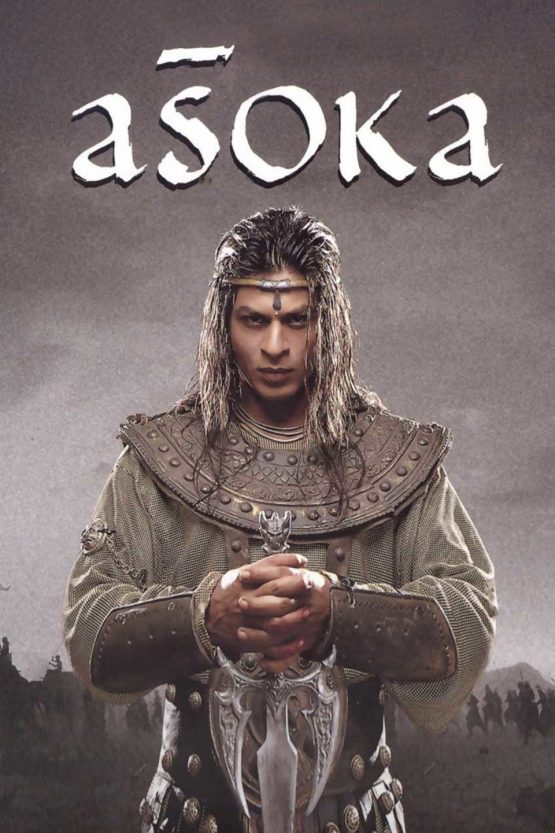 Asoka, the heir to the Maurya Empire, is sent on an exile for having fought with his half-brother, Susima. While travelling south, he meets Kaurwaki, princess of Kalinga, and falls for her.

Aśoka is a 2001 Indian Hindi-language epic historical drama film directed and co-written by Santosh Sivan. It is a dramatised version of the early life of emperor Asoka, of the Maurya dynasty, who ruled most of the Indian subcontinent in the 3rd century BCE.

The film stars Shah Rukh Khan, Kareena Kapoor, Ajith Kumar (in his first and only Hindi film role), Hrishita Bhatt, and Danny Denzongpa. It was produced by Khan, Juhi Chawla and Radhika Sangoi. The screenplay was written by Santosh Sivan and Saket Chaudhary and the dialogue by Abbas Tyrewala. It was originally released as Ashoka The Great in India.

The film chronicles the early part of the life of Emperor Asoka. It begins with his career as a General in Taxila (modern-day Pakistan) and ends with the bloody conquest of the Kalinga country (modern-day Odisha State)

Emperor Chandragupta Maurya, grandfather of Asoka, of the Maurya empire, has decided to embrace Jainism and abdicate the throne of the empire in favour of his son Bindusara. But his grandson, Prince Asoka, claims his sword. The old emperor explains that this sword is evil and the sword demands blood and destruction.

A few years later, Prince Asoka (Shah Rukh Khan), now a brave youth, is battling the rebellious chief of Taxila for his Emperor and father. He figures that his elder half-brother Susima Maurya (Ajith Kumar), who also has an eye on the throne of the empire, has deliberately withheld reinforcements from arriving, but defeats the enemy nevertheless. Asoka returns to the capital victorious and confronts Susima. Later, Susima tries to assassinate Asoka while he is bathing. The fight among the princes makes the Emperor unhappy and he orders Empress Dharma (Subhashini Ali) to control her son Asoka. She compels Asoka to temporarily leave the capital to lead the life of a common man. The Prince is disappointed but leaves nonetheless.

Asoka, alone and disguised as an ordinary traveller, rides to the south. In his travels, he meets a lovely maiden, Kaurwaki (Kareena Kapoor) and falls in love with her. He also develops a good relationship with her little brother Arya. They are on the run from the Kingdom of Kalinga along with their faithful protector Bheema (Rahul Dev) and are being chased by soldiers of the Kingdom. After saving their lives, Asoka introduces himself as Pawan, hiding his true identity. Kaurwaki and Arya are the Princess and Prince of Kalinga, who fled from their kingdom when the Prime Minister assassinated their parents and took over power. Later, Asoka and Kaurwaki get secretly married.

Soon, Asoka is summoned by his mother, who sent a messenger to tell him she has fallen ill and to come to the capital. The Emperor dispatches Asoka to quell a rebellion in Ujjaini. Before marching to the west, Asoka travels to Kalinga to meet Kaurwaki and Arya. Unable to find them, and not knowing they have gone into hiding, he is informed by General Bheema that they were slaughtered. A heartbroken Asoka attempts suicide but is saved by Virat (Danny Denzongpa), who later swears to protect him. Mad with grief and anger, Asoka leads a brutal crackdown in Ujjaini. The assassins sent by Susima injure Asoka in a battle and Virat saves him. He is taken to a Buddhist monastery at Vidisa to recover.

There, he meets a Buddhist maiden, Devi (Hrishita Bhatt), who cares for him. Asoka also survives another assassination attempt at Vidisa, this time with the help of Devi. Asoka marries Devi and returns in splendour to Pataliputra. Susima and his brothers are wild with anger from their futile attempts to eliminate Asoka. Emperor Bindusara, who favoured Susima over Asoka, becomes ill and dies. In another vigilante attack, Queen Dharma is stabbed to death by assassins sent by Susima. Angered, Asoka wants to kill Susima but has second thoughts and Susima is killed by Virat when he tries to kill Asoka behind his back and is appointed emperor.

A few months later, princess Kaurwaki and prince Arya return to Kalinga with Bheema and have the Prime Minister executed for treason. Asoka declares war on Kalinga, not knowing that Kaurwaki is alive. Kaurwaki still does not know that Asoka is Pawan, and both sides prepare for war.

A terrible war is fought in Kalinga. The Maurya army inflicts a crushing defeat on Kalinga. Not content with mere victory, Maurya soldiers butcher everyone in sight. General Bheema is killed after failing to assassinate Asoka realizing that he is Pawan and Kaurwaki is wounded. Asoka later visits the battlefield, where he discovers his horse, who was supposed to be in Kaurwaki’s possession. With a surge of hope, he frantically searches for Kaurwaki and finds her. They have a heart-to-heart talk and he apologises deeply for his actions. He is interrupted by Arya, who is dying after being pierced with arrows. With Arya dying in his arms, Asoka suddenly realises that his enemies, his family, and even Arya, are all dead because of him. His grandfather’s warning about the sword had been correct.

The film ends with Asoka throwing the sword into the water at the same spot as his grandfather, and embracing Buddhism. The final narrative describes how Asoka not only built a large empire but spread Buddhism and the winds of peace throughout the empire.

Be the first to review “Aśoka Dvd” Cancel reply