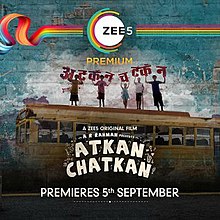 It is the story of a gifted kid Guddu, who along with his street kid friends, forms a band to win a prestigious musical competition without using conventional instruments and unites his separated musician parents.

Atkan Chatkan is a 2020 Indian Hindi-language musical drama film written and directed by Shiv Hare on his directorial debut.It is produced by Vishakha Singh under Lokaa Entertainment and presented by music composer AR Rahman.The film story revolves around Guddu, a chai delivery boy who eventually teams up with three friends and forms a musical band to take part in a musical competition despite the poor background. The film stars newcomer Lydian Nadhaswaram along with Amitriyaan , Yash Rane, Sachin Chaudhary, Tamanna Dipak and Ayesha Vindhara in the lead roles. The film was premiered via ZEE5 on 5 September 2020 and generally opened to positive reviews from critics

The story revolves around a 13 year old Guddu who works as a helper at a tea stall. His father, an ex musician is a penniless alcoholic, and his mother a singer has abandoned the family. Therefore, he has to take the responsibility of his family at a tender age. Music is his passion, he loves to observe, listen and create new tunes. On his daily chai delivery visits, he watches a wedding band practice keenly, completely losing the sense of time. He has a desire to join the band one day. Along with Guddu, the film also tells the tale of other street children who work near Guddu’s tea stall. One day while wandering in the city, they come across a carnival where they see an orchestra performing for money which inspires them to form their own band. Atkan Chatkan shows the dreams of millions of young children who do not have the means but only a burning passion that needs careful nurturing to grow and succeed in life.

Be the first to review “Atkan Chatkan dvd” Cancel reply