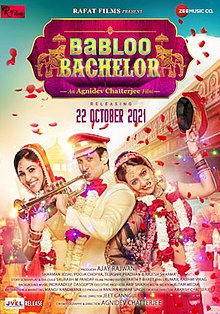 Plot
This film is based in Kanpur Uttar Pradesh, where a middle class family always dreamed of their son’s wedding. Babloo has met with a few girls hoping to find his bride, but none of the girls were right. Finally Babloo met Avantika, who had 5 boyfriends before meeting Babloo. Avantika requests Babloo to reject the proposal and Babloo rejects her for marriage. After one month at a cousin’s wedding, Babloo met Swati, who he ends up falling in love with, eventually proposing. On their swagraat (First wedding night), Swati runs away after mixing sleeping pill in Babloo’s drink and leaving Babloo a letter. Babloo sees an ad on newspaper about the shows of Swati, and traveled to Mumbai to find her and bring her home back. While in Mumbai, Babloo runs into Pooja Chopra, where he tells Chopra his feelings about Tejashri and agrees to help him win her back. While speaking with Chopra, Babloo realizes she is a good person regardless of her past engagements, leaving Babloo to choose between two women.

Be the first to review “Babloo Bachelor” Cancel reply