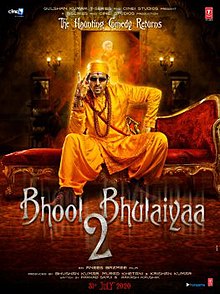 A sequel to the original movie Bhul bhulaiyya

Bhool Bhulaiyaa 2 is an upcoming Indian Hindi-language comedy horror film directed by Anees Bazmee and produced by Bhushan Kumar. It is a standalone sequel to Priyadarshan’s 2007 iconic horror comedy Bhool Bhulaiyaa. Bhool Bhulaiyaa 2 stars Kartik Aaryan, Tabu and Kiara Advani. The filming began on 9 October 2019. The film is scheduled for release on 25 March 2022.

Be the first to review “Bhool Bhulaiyaa 2 DVD” Cancel reply