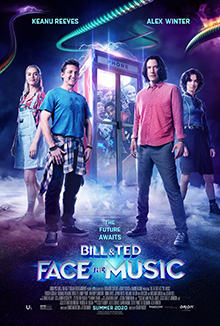 Once told they’d save the universe during a time-traveling adventure, 2 would-be rockers from San Dimas, California find themselves as middle-aged dads still trying to crank out a hit song and fulfill their destiny.

Bill & Ted Face the Music is a 2020 American science fiction comedy film directed by Dean Parisot and written by Chris Matheson and Ed Solomon. It is the third film in the Bill & Ted film series, and the sequel to Bill & Ted’s Bogus Journey (1991).[4] Alex Winter, Keanu Reeves, and William Sadler reprise their roles as Bill, Ted, and the Grim Reaper, respectively, while Kristen Schaal, Samara Weaving, Brigette Lundy-Paine, Anthony Carrigan, Erinn Hayes, Jayma Mays, Holland Taylor, Kid Cudi, and Jillian Bell join the cast. In the film, Bill and Ted must write a song to unite humanity before space-time is destroyed. The script was laid out as early as 2010, but a production deal was not confirmed until 2018. Filming commenced on July 1, 2019.[5][6][7]

Bill & Ted Face the Music was simultaneously released in theaters and through Premium VOD in the United States on August 28, 2020, by United Artists Releasing.[8][9] It received generally positive reviews from critics.

In 2020, Bill and Ted have failed to write a prophesied song to unite the world. Their marriages and careers are deteriorating, and time and space are beginning to collapse.

Kelly, the daughter of Bill and Ted’s deceased time-travelling guide Rufus, arrives to take them to the future. Her mother, the Great Leader, tells them that they have until 7:17 p.m. that night to write the song or reality will collapse. Fearing they will not be able to write the song in time, they use Rufus’s time-traveling phone booth to get the song from their future selves. However, their future selves are unsuccessful in writing the song, their wives have left them and they blame their past selves for their failures.

An impatient Great Leader sends a time-traveling robot named Dennis to kill them, hoping it will stabilize reality. Kelly travels back to the present to warn them, but instead meets their daughters, Billie and Theadora (Thea), who decide to help make the song. Using Kelly’s time machine, Billie and Thea recruit musicians Jimi Hendrix, Louis Armstrong, Wolfgang Amadeus Mozart, Ling Lun, and Grom, a drummer from prehistoric times. Billie, Thea, and their band return to the present to meet up with Kelly and a time-displaced Kid Cudi, but Dennis inadvertently kills them and sends them to Hell.