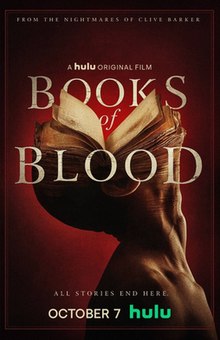 A journey into uncharted and forbidden territory through three tales tangled in space and time.

Books of Blood is a 2020 American anthology horror film directed by Brannon Braga and co-written by Braga and Adam Simon. It is based on Books of Blood by Clive Barker and the second film adaptation after Book of Blood (2009). The film premiered at the 2020 Screamfest Horror Film Festival on October 6, 2020, and was released on Hulu on October 7, 2020.[1][2] This was the final production by Touchstone Television before being folded into 20th Television.

Be the first to review “Books of Blood dvd” Cancel reply