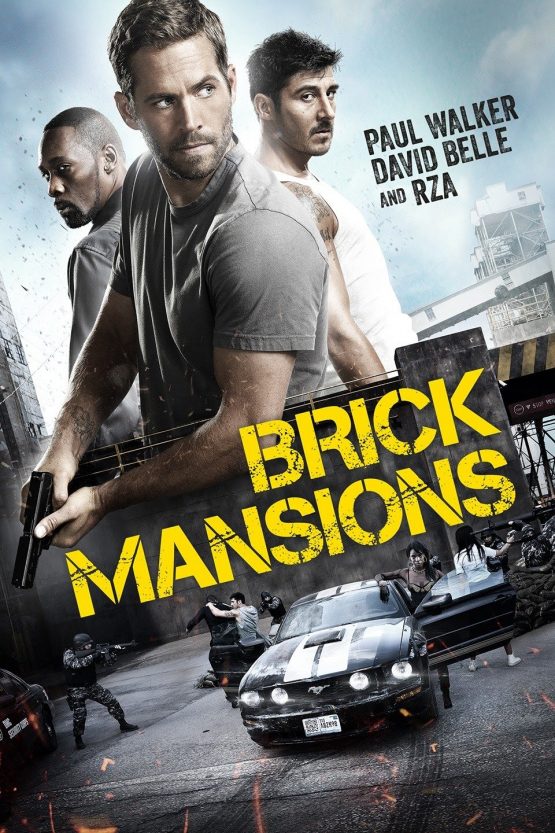 In a dystopian Detroit, undercover policeman Damien Collier and ex-convict Lino Duppre find a common enemy in a dreaded crime lord and decide to bring him to justice.

Brick Mansions is a 2014 action film starring Paul Walker, David Belle, RZA, also starring Goûchy Boy, Catalina Denis and Carlo Rota. The film was directed by Camille Delamarre and written by Luc Besson, Robert Mark Kamen and Bibi Naceri. It is a remake of the 2004 French film District 13, in which Belle had also starred.

In 2018, in a crime-ridden dystopian Detroit, a particularly notorious neighborhood has grown so dangerous that law enforcement is overwhelmed. Unable to control the crime, city officials build a colossal, 40-foot-tall containment wall around this area, known as Brick Mansions, “the projects”, or the “no go zone”, to cut it off from the rest of the city. Police monitor all movement in and out of Brick Mansions, and schools and hospitals within it have been shut down. For undercover cop Damien Collier (Paul Walker), every day is a battle against corruption after the death of his father. For French-Caribbean ex-convict Lino (David Belle), every day is a fight to live an honest life.

Lino is hunted by drug kingpin Tremaine Alexander for stealing a massive amount of heroin and emptying it down a bathtub. Lino evades capture and so Tremaine has his men capture Lino’s girlfriend, Lola. Lino attempts to free her and together they manage to escape and capture Tremaine in the Projects, turning him in to police at the border wall. However, Lino is shocked when the police free Tremaine and arrest him instead; it turns out that the police have long been in Tremaine’s pay. While arrested, Lino kills a police officer in a failed attempt to escape.

In the meantime, city officials have discovered that Tremaine has gained hold of a nuclear explosive and a small missile, which he plans to launch into downtown Detroit unless he obtains a ransom. Damien is sent undercover as a prisoner in order to free Lino so that the two can destroy the bomb together. Together, the two manage to escape from a police van. In the beginning they fight each other, both verbally and physically, but they eventually decide to work together – though not before Lino deduces that Damien is actually an undercover cop. Together the two face off against Tremaine and his gang in order to free Lola and defuse the bomb.

As they are set to defuse the missile, Damien discovers that Tremaine was bluffing and never planned to actually launch it – and that Damien was sent not to defuse the missile but to unknowingly launch it, not into downtown Detroit but into Brick Mansions itself, in order to kill its inhabitants and clear the entire area for upscale development. Damien also finds out from Tremaine that his father was not killed by criminals but by his fellow officers, and that the mayor of Detroit was behind both plots. Damien, Lino and Tremaine confront the mayor at his office and get him to admit his plan – then reveal that they have been secretly recording his statements. The mayor is then arrested.

Brick Mansions is welcomed back into the city, with Damien and Lino continuing their friendship. Tremaine runs for Mayor of Detroit, promoting the idea of equality and freedom.

Be the first to review “Brick Mansions Dvd” Cancel reply