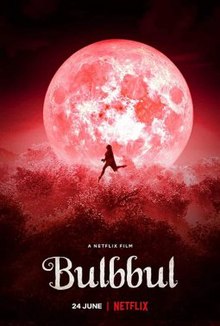 A man returns home after years to find his brother’s child bride now grown up and abandoned, and his ancestral village plagued by mysterious deaths.

Bulbbul is a 2020 Indian Hindi-language Thriller film, written and directed by Anvita Dutt. Produced by Anushka Sharma and Karnesh Ssharma and starring Tripti Dimri in the lead role alongside Avinash Tiwary, Paoli Dam, Rahul Bose and Parambrata Chattopadhyay in the supporting roles. Tripti Dimri was praised in many reviews. Set in a backdrop of 1880’s Bengal presidency, the film revolves around a child-bride and her journey from innocence to strength. Bulbbul was released on Netflix on 24 June 2020.

The story starts in the nineteenth century in Bengal Presidency. Bulbbul is married off to Indranil, the Bado Thakur (Elder Lord), when she is barely five years old. She is close with Satya, Indranil’s youngest brother, who is closer to her age. Bulbbul and Satya grow up together, playing and telling each other stories of a demon woman (“chudail”). Indranil’s mentally challenged twin brother Mahendra shows a strange appeal toward Bulbbul.

Twenty years later, Satya returns home from London. In the interim Mahendra was killed in what was believed to be a chudail’s attack. His widow Binodini now lives in an outhouse. Indranil has left the village and Bulbbul has taken over his responsibilities. The village doctor, Sudip, regularly visits to check Bulbbul’s feet due to an undisclosed incident Bulbbul refuses to discuss. Their closeness arouses feelings of jealousy in Satya. While on a hunt, a man is killed; the incident is attributed to the chudail. Satya, however, suspects Sudip. Meanwhile, Bulbbul is informed by a village boy, whose family previously visited the estate to discuss the matter of his father’s second marriage, that his mother had committed suicide after her husband chose his second wife over her, causing Bulbbul to seek the man out.

In flashbacks, it is revealed that Binodini had been jealous of Indranil and Bulbbul’s marriage, and had repeatedly hinted to Indranil that Bulbbul had feelings for Satya. With his mind poisoned, Indranil sends Satya to London to separate those two. Bulbbul and Satya had been working so far on a story together, the manuscript of which Satya hands over to her before leaving for London. Heartbroken, she throws the manuscript into the fireplace and lights them up. At this time, influenced by Binodini, Indranil goes to Bulbbul’s room, happens to take out some of the burning pages. Upon reading them, he becomes positively convinced of Bulbbul’s feelings for Satya. Enraged, he beats and mutilates her feet with iron bars. On top of that, while she is bedridden, Mahender rapes her, accidentally suffocating her while caught up in his pleasure. However, following this, there is a supernatural change in Bulbbul — she comes back with a mission to help the females in the village fight back against injustice. She goes through a symbolic transformation each time, represented by a blood red moon, which indicates that the goddess Kali had given her soul a chance to return to her mortal body. She begins to punish the men who abuse and murder their wives or take advantage of other girls by killing them though the villagers think those as doings of the chudail, who is distinguished by her backward feet. It is also revealed that she killed Mahendra following this transformation as punishment for raping her.

At present time, Satya is seen to escort Sudip to Calcutta on the suspicion of being the murderer. On the way, the driver of the carriage (the man Bulbbul was previously informed of) is killed by the chudail, making Satya realize that Sudip is innocent. He shoots the chudail woman, mortally wounding her. As he escapes the carriage, Sudip finds Bulbbul, realizing and accepting her as the chudail. During a brawl with Sudip, Satya unintentionally sets the forest on fire. He realises that Bulbbul is the chudail when Sudip shouts for her. Upon realizing this, Satya cries in agony, while Bulbbul who was trying to escape, takes refuge on a tree and watches everything around her burn before she is slowly engulfed by the flames.[8][9]

A year later, Indranil returns to his empty estate. He discovers that Satya has departed, as Satya, guilt-ridden for what had happened with Bulbbul, had felt that he too was becoming like his brothers. That night, Indranil is awoken from his sleep by Bulbbul, who emerges from embers and smirks at him, hinting that she kills him as revenge.

Tripti Dimri as Bulbbul, a former child-bride who secretly fights against the injustice females face in her village.
Avinash Tiwary as Satya, Indranil’s younger brother and Bulbbul’s childhood friend with whom she is in love with.
Paoli Dam as Binodini, Mahendra’s widowed wife.
Rahul Bose as Indranil, Bulbbul’s husband whom she married at 5 years of age and Mahendra, Satya and Indranil’s mentally challenged brother who lusts after Bulbbul.
Parambrata Chattopadhyay as Dr. Sudip, a local doctor who regularly checks up on Bulbbul’s mutilated feet.

Be the first to review “Bulbbul (blu-Ray)” Cancel reply