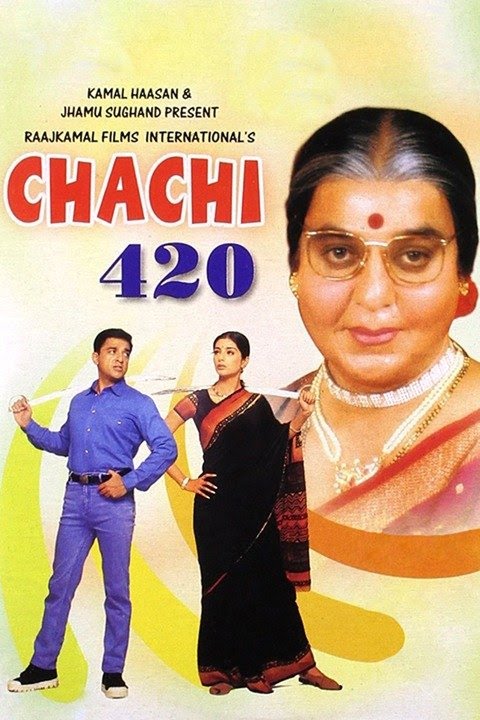 In order to see his little girl more often, a divorcee disguises himself as an old lady and gets a job as his own daughter’s caretaker.

Chachi 420 (transl. The trickster aunt) is a 1997 Indian Hindi comedy film, co-written, produced and directed by Kamal Haasan. The film is a remake of the Tamil film Avvai Shanmughi (1996) which was inspired from the Hollywood film Mrs. Doubtfire (1993).

Jaiprakash Paswan (Kamal Haasan) and Janki Paswan (Tabu) are fighting a divorce case. Janaki is the only daughter of Durgaprasad Bhardwaj (Amrish Puri), a staunch Hindu Brahmin businessman. Jaiprakash, a Hindu Dusadh, is an assistant dance director in films. The duo fell in love and married against the will of Durgaprasad. However, Janki buckles under the pressure of middle-class life. Other differences crop up between the couple and Janki walks out. The court grants the divorce. Jai is allowed to meet his beloved daughter Bharti (Fatima Sana Shaikh) once a week. But when he sneaks into the Bhardwaj house to steal Bharti, he loses visitation rights.

Meanwhile, Durgaprasad puts ads in local newspapers for a nanny for Bharti. Jai sees this as an opportunity and calls Durgaprasad. Impersonating a female, he introduces himself as ‘Shrimati Lakshmi Godbole’ and applies for the position. With the help of a drunkard makeup artist Joseph (Johnny Walker in his last and memorable role), Jai undergoes a complete transformation into Lakshmi Godbole, a dignified elderly Marathi woman. He goes to the interview, where he is generally viewed as the last pick. But Bharti has an accident, and Lakshmi acts promptly to give first aid. Lakshmi gets the job and the respect of the Bhardwaj family.

Jai begins the job but creates plausible stories so that his real work schedule does not clash with the job in Bhardwaj’s home. Apart from Joseph, only Bharti (who sees through her father’s disguise) knows the real identity of Lakshmi. Jai learns that Durgaprasad’s secretary Banwarilal Pandit (Om Puri) is not exactly thrilled at Lakshmi’s entry. The reasons are various, such as Banwa’s womanizing nature (which naturally views an old woman like Lakshmi with dislike) and his desire to siphon off Durgaprasad’s money via friendly maids.

Meanwhile, Durgaprasad decides to get Janki remarried to Dr Rohit (Rajendranath Zutshi), her childhood friend. One day, when Janki and Rohit get attacked by goons in the market, the doctor scampers. Lakshmi saves Janki’s life and modesty. Later, Durgaprasad tells Lakshmi that he has changed his mind about the marriage on learning of Rohit’s cowardice. Lakshmi also exposes the thefts committed by the maid in the Bhardwaj house. The maid is fired. Banwa has no other option but to let a male cook be appointed instead. Jai runs into his old friend Shiraz (Nassar), a Muslim restaurant chef who is now doing menial jobs as he lost his job trying to help Jai. Lakshmi introduces Shiraz to the Bhardwaj household as Pandit Shivraj Sharma, a mute Brahmin cook. Even Shiraz does not know that Lakshmi and Jai are the same people.

Jai learns that although Janki likes Lakshmi, who by now has earned the affectionate title of Chachi (a respected aunt), she still loathes Jai. Meanwhile, Jai has other problems in his own home. His landlord Hari (Paresh Rawal) is after him for his rent. After he sees Lakshmi, Hari falls for her. As if that is not enough, a struggler named Ratna (Ayesha Jhulka) tries to cozy up to Jai. Meanwhile, Durgaprasad also falls for Lakshmi and goes to the extent of proposing to her.

Jai, as Lakshmi, buys time by telling Durgaprasad that ‘she’ is married but ‘her’ husband has left ‘her’ and got converted into a Christian named Joseph. Lakshmi also convinces Durgaprasad that ‘she’ is still waiting for ‘her’ husband. On the other hand, Jai tells Hari that Banwa is Lakshmi’s husband Durgaprasad. He also tells Hari to harbour no feelings for Lakshmi. At the same time, Jai tells Banwa that Lakshmi’s husband has converted and calls himself Haribhai.

Banwa intensifies his efforts to discredit Lakshmi in the eyes of Durgaprasad and Janki but in vain. Meanwhile, Janki and Durgaprasad realize that they have punished Jai too hard for all the things he has done. Banwa gets a small victory when he blows Shiraz’s cover. But Lakshmi makes Durgaprasad see sense that religion and caste do not matter. Durgaprasad shows mercy on Shiraz, giving a verdict that the cook can stay and need not put up his act anymore. However, now Durgaprasad ends up hurting Janki’s feelings.

Banwa and Janki see that there is something fishy about Lakshmi. Meanwhile, Shiraz tries to force Lakshmi to marry Durgaprasad. Shiraz threatens ‘her’ by covering himself in kerosene, which forces Jai to reveal himself. But, owing to a misunderstanding about this scene, Banwa is able to convince Janki that Lakshmi is a promiscuous woman who is seducing the cook as well as Durgaprasad. Janki, who is very hurt by the turn of events, leaves her father’s home and goes to reconcile with Jai. But on seeing Ratna waiting for him, and Lakshmi’s clothes strewn about his home, Janki gets the wrong idea that her husband is also promiscuous. Janki goes to commit suicide. Jai/Lakshmi follows on a motorcycle and jumps into the river to save her. There, Jai/Lakshmi reveals his/’her’ true self. Janki hears the whole story and reconciles with him. They come up with a story that Lakshmi died trying to save Janki.

To tie up other loose ends, they convince Banwari that Lakshmi is dead. They threaten and blackmail Banwa with his secrets to ensure his silence. They tell Hari to let it go. Joseph almost accidentally betrays some part of the truth, but Jai hushes up the matter by saying that Lakshmi will always remain alive in the hearts of everybody who knew her. Jai and Janki remarry.

Be the first to review “Chachi 420 Dvd” Cancel reply