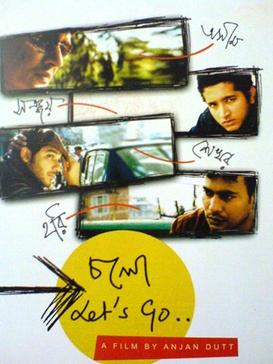 This is a story about four friends, Hari, Shekhar, Ashim, and Sanjay. They studied at the same school. Ashim studied to be a doctor but decided to never pursue that profession. Sanjay worked for an advertisement agency but left the job. The rest have never held jobs. They started a Bengali band, but they were beaten up by the public at a stage show in North Bengal. They vowed to never perform again.

At this point, they start a travel agency, called ‘Gharoa Travels’. On their first trip, they start with nine passengers. On the way to the hills, suddenly a young woman named Ria joins them. The film deals with their journey through North Bengal. The ten tourists and the four operators form an assorted medley of characters. As the journey progresses, their natures are slowly revealed. The film has flash-forwarding juxtaposed with the present, giving the audience a sense of the fates of the characters as the story progresses.