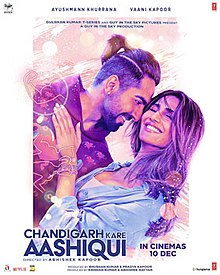 Manu, a bodybuilder from Chandigarh falls in love with Maanvi, a Zumba teacher. All seems well until a shocking revelation causes turmoil in their love story.

Chandigarh Kare Aashiqui is an upcoming Indian Hindi-language romantic drama film directed by Abhishek Kapoor and produced by T-Series in collaboration with Guy In The Sky Pictures. Announced in July 2020 the film features Ayushmann Khurrana and Vaani Kapoor in lead roles. It is scheduled for theatrical release on 10 December 2021.