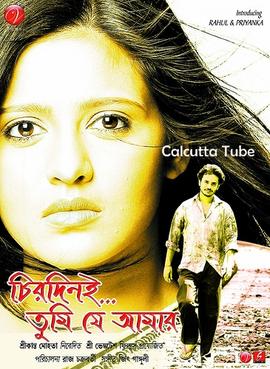 Pallavi, a rich, spoilt girl, falls in love with Krishna, a scooter mechanic, and gets married without her parents’ approval. The situation takes an ugly turn when her family tries to separate them.

Chirodini … Tumi Je Aamar (English: You Are Mine Eternally) is a 2008 Indian Bengali film by Raj Chakraborty. This is a remake of Tamil film Kaadhal (2004) directed by Balaji Sakthivel.

Krishna (Rahul Banerjee) is a diligent scooter mechanic in Siliguri and life goes on smoothly for him until the rich schoolgirl Pallavi (Priyanka Sarkar) sets her eyes on him. The infatuation reaches dangerous levels when she coaxes Krishna to take her away from the clutches of her family, which has other plans about her future. The film begins with the elopement, as Pallavi steps out of her house in her school uniform, leaving even her wristwatch behind since Krishna has instructed her not to take a single thing with her. The two rush into a shopping mall where Pallavi hurriedly changes into a boy’s shirt, pants and cap, leaves her uniform behind, and the two board the bus.

The flashback, as point-of-view narrations between Pallavi and Krishna, are intercut with Pallavi’s don-like father and uncle terrorizing the neighbourhood in search of the truant girl. Krishna hesitantly yields to her charm and the two run away to Kolkata. Krishna’s friend Ali (Rudranil Ghosh) and his group at Kolkata helps them, and the lovers marry. The couple consummates their union while the mess chaps hastily organize a proper wedding and elaborate reception.

The family tracks down the couple and offers to come back. While coming back Pallavi’s family separates them. Krishna gets beaten by her father’s gang. Pallavi agrees to marry another man to save Krishna’s life and loses sense. Krishna took one bangle of Pallavi’s hand and leaves that place. While she believes this decision is best and moves on with her life.

A couple of years later, Pallavi is married to a different man and has a baby with him. One day, along with her husband and baby, she comes across a mad man on the streets. Pallavi soon realizes that the insane man is none other than Krishna as she spots her name on his chest which he had carved as a sign of love all those years ago. Krishna had lost his memory and sanity from the grievous assault at the hands of Pallavi’s father and relatives which resulted into the permanent damage of his brain. She slips into a complete state of shock as she witnesses Krishna’s pitiable condition. She tries to revive his memory and bring him back to his senses. However, Krishna’s condition had reached the worst phase and he doesn’t recognize her even after her constant persuasion. He leaves her and walks away leaving Pallavi in utter sorrow and guilt as she blames herself for Krishna’s ill fate.