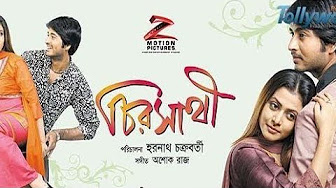 Raju, an orphan, falls in love with Riya Roy, the daughter of business tycoon Mahendra Roy. However, the couple faces difficulties as Mahendra Roy has already selected another boy for Riya.

Chirosathi (Bengali: চিরসাথী) is a Bengali drama movie that was released in 2008, directed by Haranath Chakraborty. The movie featured Hiran and Koyel Mullick.

Raju an orphan youngster brought up by his aunt Namita. He falls in love with Riya Roy, the daughter of business tycoon Mahendra Roy. They meet at their college excursion, and after that initial tiffs and estrangement. They fall madly in love. While Mahendra Roy already zeroes in on getting Riya’s married to Dhiman (the son of another business biggie Mr. Mohim), Raju arrives at Riya’s residence in disguise with the help of Mahendra Roy’s estranged young brother Pratap Roy. Within days Raju gets success by associating with Riya’s joint family. But the conservative, chauvinist and patriarchal Mahendra Roy shifts bad and constantly sends negative vibes towards Raju in a passive way. In the meantime the spoilt brat Dhiman takes Riya to a pub and insults her to get beaten up by an avenging Raju. Without knowing the truth Mahendra Roy expels Raju from his house. Raju meanwhile reveals that his elder brother Apurva who has become insane incidentally loved Riya’s elder sister and Mahendra’s elder daughter Priya (she committed suicide). In the end Mahendra understands Dhiman’s nature and the lovers unite gleefully.

Be the first to review “Chirosathi Dvd” Cancel reply