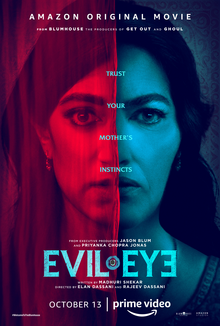 A superstitious mother is convinced that her daughter’s new boyfriend is the reincarnation of a man who tried to kill her 30 years ago.

Evil Eye is a 2020 American horror film directed by Elan and Rajeev Dassani and written by Madhuri Shekar, based on her Audible Original audio play of the same name. The film stars Sarita Choudhury, Sunita Mani and Omar Maskati. It was executive produced by Jason Blum of Blumhouse Television and Priyanka Chopra of Purple Pebble Pictures

Pallavi lives in New Orleans and has a close, but contentious, relationship with her mother Usha, who has moved back to Delhi because of her husband’s work. Usha is worried that Pallavi, who is almost thirty, is unmarried. Usha, who is heavily interested in vedic astrology constantly worries about it and tries to set her daughter up on arranged dates. Usha’s anxiety is magnified by migraine headaches which have caused her to stop socializing.

To placate her mother, the happily single Pallavi agrees to meet up at a cafe for a blind date that Usha has set up. The date never shows, but Pallavi meets another man, Sandeep. The two of them begin dating. Sandeep seems like the perfect man: he’s handsome, wealthy, and Indian. Later, when discussing their romantic pasts, Sandeep tells her that a former girlfriend tried to commit suicide when they broke up. When Pallavi rejects Sandeeps attempt to give her some earrings, she sees his hands clench in anger, but dismisses it.

Eventually, she tells Usha about her new boyfriend. But far from being overjoyed, like Pallavi expected, Usha is concerned. She demands details about Sandeep so that she can check up on him. An astrologer tells her that Pallavi and Sandeep have unprecedented compatibility. However, a private investigator who Usha hires reports that Sandeep has a string of former girlfriends who are reluctant to talk about him.

Sandeep invites Pallavi to move in with him. She refuses, but instead he offers to pay for the rent on a new apartment for her so she can quit her job and focus on her aspirations to be a writer. Pallavi moves in to the new apartment, but when she tells Usha her mother grows concerned that Sandeep has too much control over her. Pallavi says that Sandeep is only doing things for Pallavi’s own good.

The phrase triggers Usha, who remembers that her abusive ex-boyfriend used to say it all the time to her. She becomes convinced that Sandeep, who was born nine months after Pallavi, is the reincarnation of her old boyfriend, who had died the night Pallavi was born after violently confronting Usha. She tries to convince Pallavi to leave Sandeep, but Pallavi, and everyone else, thinks that her concerns are crazy.

When Pallavi gets engaged to Sandeep, Usha has a breakdown. At the urging of her husband, she agrees to give Sandeep a chance. Usha confides in her daughter about her past: before she got married she had dated a man who was controlling and abusive. After she broke up with him and married someone else he would stalk her. One night, when she was nine months pregnant, he confronted her on a bridge, attacking her and slamming her head into a concrete balustrade. In the struggle she pushed him over the side and into the river. Usha went into labor that night, giving birth to Pallavi, and was never connected to the ex boyfriend’s death.

Sandeep calls Usha. He admits that her suspicions are correct: he is the reincarnation of her former boyfriend. He demands that she travel to America to meet him in person. When she arrives, Sandeep meets with her and tells her that he wants what he has always wanted: her. He warns her that if she tries to stop the marriage he will kill Pallavi. At Pallavi’s apartment the three of them have dinner. Usha follows Sandeeps demand that she not try to upset the marriage, but Pallavi becomes suspicious that her busybody and worrying mother has suddenly become so supportive. Sandeep, in turn, becomes more anxious and demanding at Usha’s passive aggressive behavior. Usha pulls back her hair, revealing that she has the same set of earrings that Sandeep gave to Pallavi, a gift from her abusive ex boyfriend. Sandeep becomes enraged and attacks Usha. The two women fight him off and seriously injure him.

At the hospital, Usha recovers from her injuries as Pallavi waits. Realizing that her mother was right, Pallavi worries about the future, and what might happen with her potential daughters. Usha comforts her by saying that Pallavi will teach her daughters to be careful. She then draws Pallavi’s attention to the handsome Indian doctor who has been attending her. Down the hall, Sandeep dies. The final shot shows a newborn baby, indicating that he has been reincarnated once again.

Be the first to review “Evil Eye dvd” Cancel reply