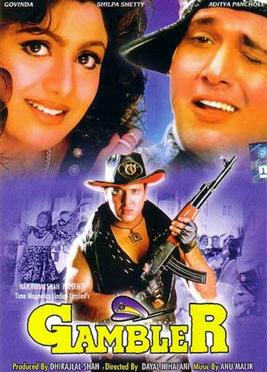 Though Inspector Dayashanker is lazy, he unwittingly unearths a criminal conspiracy and becomes the pride of his division overnight. However, the local gangsters turn his life into a living nightmare.

The Gambler is a 1995 Indian Hindi-language action film directed by Dayal Nihalani, which is a remake of the Malayalam film Aanaval Mothiram.

Police Inspector Dayashanker Pandey is a slacker, a man who does not want to put his life under any risk, and is quite comfortable sharing tall tales, and a desk job. Fate has other plans for him, for whenever he goes on duty outside, he somehow apprehends some criminals or some smuggled goods or drugs. He thus becomes the pride of his division, much to his discomfort. For Dayashanker knows that if he is publicly felicitated, this will put him in the black books of many underworld gangsters, which will rip his comfortable and easy-going life apart.

Be the first to review “Gambler Dvd” Cancel reply