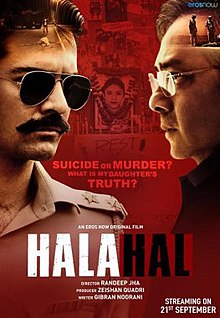 The Murder of a college girl morphed into a suicide takes Dr. Shiv on a journey to dig the truth out of his daughter’s murder.

Halahal is an Indian Hindi-language mystery thriller film which premiered on Eros Now on 21 September 2020. The film was written and produced by Zeishan Quadri and directed by Randeep Jha. Starring Sachin Khedekar and Barun Sobti.

Be the first to review “Halahal dvd” Cancel reply