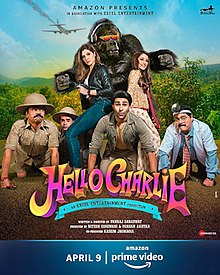 Hello Charlie is an Indian Hindi-language comedy film written and directed by Pankaj Saraswat and produced by Farhan Akhtar and Ritesh Sidhwani under the Excel Entertainment banner. The film stars Jackie Shroff, Aadar Jain and debutante Shhloka Pandit with Elnaaz Norouzi and Rajpal Yadav in supporting roles. The film was released on 9 April 2021 on Amazon Prime Video.

M. D. Makwana is a wanted fraudster who must escape from Mumbai after duping banks of a lot of money, for which his model girlfriend suggests disguising him as a caged gorilla so that he would be undiscovered, while at the same time, Toto, a real gorilla escapes from a crashed plane and is also declared wanted.

Chirag “Charlie” Rastogi is a young man who has been unsuccessful in whatever ventures he has partaken. Later, he is assigned the job of escorting a gorilla to a circus by the model, little realizing that it is Makwana in disguise. Along the way, a series of adventures follows as Chirag finds himself confused between both Toto and Makwana, while a female circus acrobat-cum-dancer tags along even as a forest ranger and a veterinary doctor are on the hunt for Toto.

Jackie Shroff as M. D. Makwana “Mac”, a wanted fraudster, who disguises himself as Toto, the wanted gorilla, to escape the arms of the law
Aadar Jain as Chirag Rastogi aka Charlie, a young man who is assigned the task of escorting “Toto”, in reality, a disguised Makwana, to the Diu Dusshera circus.
Shhloka Pandit as Padma, a circus acrobat-cum-dancer who joins Charlie
Elnaaz Norouzi as Mona, a model
Rajpal Yadav as Ranger Solee Topi
Girish Kulkarni as Priyesh Patel
Siddhanth Kapoor as Inspector Jaidev, Mona’s brother
Bramha Mishra as Ardali Ram Singh
Bharat Ganeshpure as Dr. Ganatra, a Veterinary Doctor
Darshan Jariwala as Karsan Bhai, Chirag’s Mama

Be the first to review “Hello Charlie DVD” Cancel reply