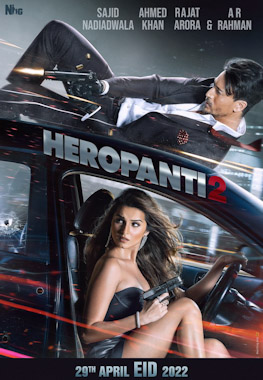 Heropanti 2 is about a guy who helps people at night. Whether that be saving someone from a robbery or kidnapping this guy is always there. The Indian government finds out about this and sends him to Russia where he has the mission of killing Russian troops at night. But somehow something goes wrong

Heropanti 2 (transl. Heroic antics 2) is an upcoming Indian Hindi-language romantic action film and a sequel to the 2014 film Heropanti. The film is directed by Ahmed Khan, written by Rajat Arora and produced by Sajid Nadiadwala under the banner of Nadiadwala Grandson Entertainment. It stars Tiger Shroff, Nawazuddin Siddiqui and Tara Sutaria. It is scheduled to be released on 29 April 2022.

Be the first to review “Heropanti 2 dvd” Cancel reply