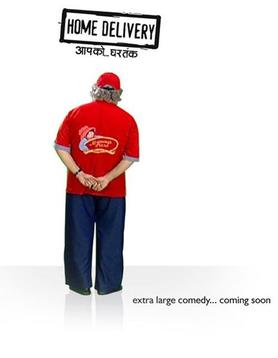 Sunny Malhotra (Vivek Oberoi) is a 28 year old writer who has carved a name for himself as a popular agony uncle, named Gyan Guru, writing for the Times of Hindustan. Sunny also managed to bag a prestigious screenplay writing project for the most happening film director, Karan Johar.

Home Delivery is the story of how it takes just a single day to change a person’s outlook on life forever. Sunny Chopra (Vivek Oberoi) is a 28-year-old writer who has carved a name for himself as a popular agony uncle, named Gyan Guru, writing for the Times of Hindustan. Sunny also managed to bag a prestigious screenplay writing project for the most happening film director, Karan Johar. A bit of a cynic, he believes he is a self-made man and that whatever he has achieved in life is due to his own hard work and nobody else’s. His cynicism is extended to his views about marriage to his fiancée Jenny (Ayesha Takia) and to the festival of Diwali too.

Just as Sunny is cynical about life, Michael Burnett (Boman Irani) is optimistic about it. 51-year-old Michael is a simple-minded man, almost childlike and has recently landed job as a pizza delivery boy at Mummy’s Pizza. Michael has sort of an inclination to lose every job he has ever had in two days flat. This time, however, he vows to keep this one no matter what.

On the eve of Diwali, Sunny has loads of stuff to do and very little time to do it. He has to meet his screenplay deadline, he has to get rid of Pandey (Saurabh Shukla), his irritatingly intrusive next door neighbor, and he’s got to avoid his editor’s telephone calls who is livid that he’s bunking work. But more importantly he needs to get Jenny out of the way because he has a date with Maya (Mahima Chaudhry), a South Indian superstar who he has been in love with since as long as he can remember. In this confusion, Sunny forgets that there is no food in his bachelor pad and orders a pizza that Michael is given the task of delivering. And what Michael delivers to Sunny is so much more than just a pizza. Sunny is home delivered life’s simple lessons – right to his doorstep.

Be the first to review “Home Delivery Dvd” Cancel reply