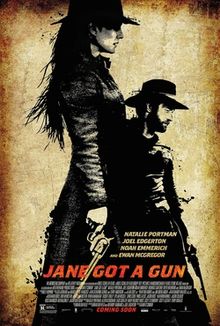 Jane Got a Gun Dvd

When a gang of violent outlaws are hell-bent on killing Bill, his wife Jane is left with no other option but to ask for help from her alcoholic ex-fiance. Together they must fight for their survival.

After a long period of production issues since 2012, involving director and casting changes, principal photography began on March 21, 2013. The film was released on January 29, 2016.

The film was shown on October 12, 2017 at the 7th Almería Western Film Festival.

Jane and her husband Bill “Ham” Hammond live in an isolated house with their five-year-old daughter Katie. One day Ham returns home with several serious bullet wounds. As Jane is attending to his injuries, Ham tells her that “the Bishop Boys are coming”. This is a gang of vicious criminals, led by John Bishop, that Ham himself used to ride with.

Realizing that she is going to need help in order to defend her home and family from the Bishops, as Ham’s injuries have rendered him helpless, Jane takes her daughter to a place of safety, with a woman friend whom she trusts. She then rides to the home of a neighbor, Dan Frost, and asks him if he will help her to protect her property from the Bishop Boys. Dan, a somewhat surly man who lives in a squalid, dirty house, refuses to help. It is obvious from their brief conversation that there is some past history – and bitterness – between Dan and Jane.

Jane rides into town to buy guns and ammunition and hopefully find someone who will help her family. As she is leaving the gun shop, she is waylaid and dragged into an alley by one of the Bishop gang. He threatens her at gunpoint and – despite Jane protesting that she “hasn’t seen Hammond in years” – he demands that she take him back to her house, as he is convinced that Ham is there, having recognized the gun Jane is carrying as one belonging to Hammond. However, at this point Dan Frost suddenly appears and tells the thug to leave Jane alone. While the two men are distracted, Jane draws her gun and kills the outlaw.

Leaving the body in the alley, Jane and Dan ride back to her house. Ham is still alive, but very weak. Dan has changed his mind about helping Jane, so they start preparing for the expected attack from the Bishop gang. Meanwhile, Bishop has already set out with his gang to find Ham. His men spread out over the area to extend their search, and one of them chances upon Jane’s house. He recognizes Jane, but Dan kills him before he can raise the alarm.

Dan digs a shallow trench in Jane’s front yard, and they fill this with jars containing kerosene, nails and pieces of glass. As they work, flashbacks of their previous lives are shown. Jane and Dan were once engaged, but he enlisted in the army to fight in the American Civil War. Captured by the enemy, he was held for years in a prison camp, and when he finally returned home, Jane had left. He travelled from state to state trying to find her, showing her photograph in every town. Eventually, he heard that she had moved west on a wagon train led by John Bishop. Dan talked to Bishop, who told him that during the journey Ham and Jane ran off together. He said he would gladly help Dan to track them down, as he had his own scores to settle with Ham, but Dan refused, saying that he preferred to ride alone. Dan eventually found Jane, but by then she was married to Ham, and they had had a child. Dan realized that he had lost her forever and was left broken-hearted by the discovery.

Later, Jane tells Dan her side of the story. After Dan left to enlist, she discovered she was pregnant. When Dan did not return, or write, she assumed he was dead. By the time their child, a little girl called Mary, was two or three years old, life in Jane’s war-torn town had become so wretched that she decided to take Mary and move West on the Bishop wagon train. Too late, she and the other women on the wagon train realized that Bishop’s intention was to start a brothel in another town, and he intended to force the helpless women into prostitution.

A further flashback shows that Ham, having taken a fancy to Jane during the wagon train journey, tells Bishop that he would like to marry her. But Bishop tells Ham that Jane is his “property”. Later, Ham finds that Jane and her daughter have gone missing; searching for Mary, he sees a child’s boot in the river, and thinks the child has drowned. He goes to the brothel where Jane has been forced to work, and rescues her. Jane is distraught when Ham tells her that Mary is dead.

Back in the present time, the Bishop gang finally arrive at Jane’s house, under cover of darkness. Dan and Jane fire into the booby-trapped ditch, igniting the kerosene “bombs”. Most of the gang are killed, but some – including Bishop himself – escape. Jane and Dan manage to move the dying Ham into a shallow storage space beneath the floor, to protect him from the gunfire, but the strain is too much for him and he dies. Dan and Jane continue to fight it out with the remaining gang members, although both are wounded. Finally, Bishop (the only gang member left alive) manages to corner Dan and is about to kill him, when Jane sneaks up behind Bishop and draws her gun on him. Trying to persuade her not to kill him, Bishop tells Jane that Mary is not dead, as she had thought. Jane shoots him several times, wounding him badly, until in his agony he reveals that Mary lives at the brothel. Jane then kills Bishop.

Jane and Dan go to the brothel and find their daughter, Mary, who is working as a servant. Jane takes the bodies of John Bishop and his gang to the sheriff and collects a huge reward. Then she, Dan, Mary and Katie ride off together to start a new life as a family.