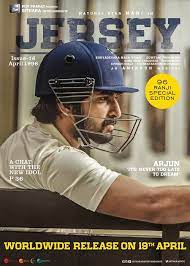 A failed cricketer decides to revive his cricketing career in his late 30’s despite everyone being skeptical of his ability to do so.

Jersey is an upcoming Indian Hindi-language sports drama film written and directed by Gowtam Tinnanuri, a remake of his 2019 Telugu film of the same title. It stars Shahid Kapoor as a cricketer, alongside Mrunal Thakur, and Pankaj Kapur. The film is produced by Allu Aravind, Aman Gill, Dil Raju, and Suryadevara Naga Vamsi.

Be the first to review “Jersey DVD” Cancel reply