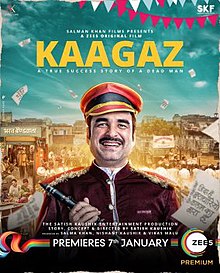 A satirical comedy about a common man and the struggle he goes through to prove his existence after being falsely being declared dead on government records.

Kaagaz (transl. Paper) is a 2021 Indian biographical comedy film written and directed by Satish Kaushik and produced by Salman Khan and Nishant Kaushik under the banner of Salman Khan Films and The Satish Kaushik Entertainment Production. The film stars Pankaj Tripathi and Monal Gajjar with Amar Upadhyay who plays the main antagonist. The plot of the film is based on the life and struggle of Lal Bihari, a farmer from the small village of Amilo Mubarakpur, who was declared dead on official papers

Be the first to review “Kaagaz dvd” Cancel reply